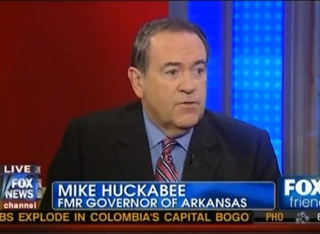 Mike Huckabee‘s semi-weekly visit to the weekend Fox & Friends crew today understandably focused primarily on Hilary Rosen and first shot fired in the general election: the claim that Ann Romney “hasn’t worked a day in her life.” Needless to say, Huckabee did not appear much impressed with the comments, but he did find the Democratic reaction to them shockingly swift, saying, “I’ve never seen Democrats swim backwards so much.”

His initial take on the matter was that it was politically expedient for Republicans: “the Romney people would love to continue as long as possible.” That said, he found the reaction from Democrats more telling than a lot of the outrage towards the comments, which he found understandable. Calling for “gold medals” for the Democrats “for their exceptional performance in the backstroke,” Huckabee joked, “I’ve never seen Democrats swim backwards so much.” He found President Obama’s reaction “the most interesting,” as he described Rosen “as if it was some anonymous person on television, he didn’t know who it was.”

Needless to say, Huckabee found her comments “utterly boneheaded,” arguing that it “showed a level of contempt for women who do one of the hardest jobs there is.” He did not mind the gender gap in politics so much, he told the hosts, because it cuts both ways: “it is always a challenge for Democrats to win men.” And while he did think Mitt Romney had to “do a better job of showing that he is being sensitive to the issues of women,” Huckabee argued that “the real issues of women is the economic viability of the family,” and the economy affects everyone. Huckabee also weighed in on Romney’s new, less affected gun control stance, praising the fact that he isn’t claiming to “hunt varmints” anymore but stands with the rights of gun owners.