Huckabee: Trump Picking Romney for Secretary of State Would be a ‘Real Insult’ 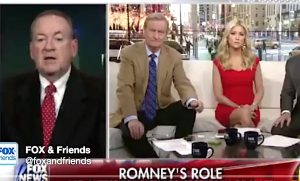 It would seem that Mike Huckabee isn’t ready to forgive Mitt Romney for speaking against Donald Trump during the 2016 election.

Since he became President-elect, Trump held a meeting with the former Massachusetts governor, and is reportedly thinking about making Romney his Secretary of State. This is a significant departure from the days when Romney was blasting Trump as a “phony,” a “fraud,” and a “con man,” while Trump ripped Romney for choking against President Obama in the 2012 election.

Huckabee was asked for his thoughts about this on Wendesday’s Fox & Friends, where he continued to slam Romney for attacking Trump. Huckabee went on to say that appointing him would be unconscionable unless Romney gives a public speech admitting he was wrong and taking back every insult he said about the mogul.

.@GovMikeHuckabee: Choosing Mitt Romney as Secretary of State would be a big insult to all those who voted for Trump pic.twitter.com/hizFmHCEvJ

“When you go after the person that is the nominee of your party, who has been duly nominated by the voters, and then you’re savaging the voters, you’re not just savaging Donald Trump,” said Huckabee. “It would be a real insult to all those Donald Trump voters who worked really hard.”

After losing the Republican nomination to Trump, Huckabee made it a habit of his to rip #NeverTrump people and various conservatives who refused to support the Republican Party’s choice.