Huckabee: ‘We Are Kidding Ourselves’ To Think 2012 Election Won’t Be ‘Razor-Thin’ 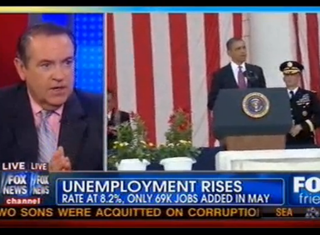 Mike Huckabee had some good news for his party, bad news for the nation to discuss on Fox & Friends this morning: the jobs numbers, which have the Obama administration extremely concerned about the upcoming elections. Huckabee explained this morning that the numbers did hurt the President, but “that doesn’t mean he won’t be reelected.”

RELATED: Huckabee: Ignoring Catholic Lawsuits Against Obama ‘Like Not Covering The ‘I Have A Dream’ Speech’

The worst thing about the jobs numbers, Huckabee argued, “is that there are a lot of Americans who want to go to work and they can’t.” Huckabee also attacked the economists predicting a turnaround for the economy, joking, “economists are the only people in the world who can be wrong 100% of the time.” While he did think it was not all bad, “we had a few good months, but none of them good enough.” He also did not think there would be a major shift in the economy between today and November. “That doesn’t mean he won’t be reelected,” he argued, “we’re kidding ourselves to think that this is going to be anything other than razor-thin election.” He argued that the election was close precisely because it “will be decided by about 10% of the voters in six states.”

Apart from those states, the hosts asked about the union debate in Wisconsin, which Huckabee argued could not be going too much in the White House’s favor given that President Obama had visited almost every state bordering Wisconsin without visiting that state.

The segment via Fox News