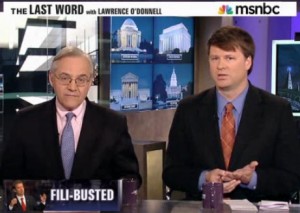 As we enter day two of the Rand Paul Constitutional Sainthood Movement, drone skeptics on all sides continue to beclown themselves by praising the Kentucky Senator as a “flawed messenger” for drone ocversight, as if none of the garbage that flew out of his face for 13 hours counts as “the message.”

Among the qualified Rand fans is, apparently, The Huffington Post’s Ryan Grim, who told The Last Word host Lawrence O’Donnell that President Obama should release the secret “Kill List” to prevent nuts like Rand Paul from just making stuff up.

O’Donnell began by playing clips of the most awesome thing to come out of this whole shitshow, which was Senator Lindsey Graham asking Republicans where their concern over drone strikes was during the Bush administration, along with Senator John McCain‘s rebuke of Paul’s guano-fueled imagination. Lawrence concluded that drone skeptics would have been better served by a less “flawed” messenger than Rand Paul.

Liberal columnist E.J. Dionne agreed that the McCain and Graham reactions were priceless, but said that, despite Paul’s wingnuttery, “we need a debate about drones and when they should be used, and what is the danger of overusing them.”

O’Donnell then played a clip of Sen. Paul playing the character of a hunted Tea Party Patriot. “I was at a Tea Party meeting, and I was critical of the President,” Paul said during his filibuster, “but I’m not a revolutionary, please don’t kill me.”

O’Donnell said he’d never heard anything “sleazier” than that on the Senate floor, but really, it was just stupid. Drone technology is advanced, to be sure, but I don’t think even they could hit a target as small as a Tea Party meeting.

“Frankly,” Grim continued, “if there is a classified kill list that includes american citizens if you don’t want conspiracy theories to start circulating then publish that list. if the people on that list are dedicated revolutionaries or extremists they are not going to be surprised to find their name on the list. Publish the list and let people challenge them. as long as there is a secret list of people the President thinks he can kill, you are going to have people concocting all sorts of theories, and there is no way, beyond transparency, that you can challenge that.”

There are two separate points here, the first being that the President should publish the “secret kill list,” which is an idiotic notion on its own. Of course there are terrorists who feel safe from detection, and who could benefit from such a warning, like maybe Osama bin Laden son-in-law and recent guest of the penal system Sulaiman abu Ghaith. Does Grim think he’d have been burning up his air miles around Jordan if his name was on a public kill list? Since the drone program is covered by the Authorization for the Use of Military Force, do we also need to publicize our secret plans for Afghanistan?

But even if you think the idea of publishing the “secret kill list” has merit, it shouldn’t be to quiet the voices in Rand Paul’s head. By that logic, the State of Hawaii would have to start giving guided tours of its records department, Area 51 would have to install glass walls, and I think we’d have to dissolve FEMA.

I’m all for transparency, but publishing warnings to military targets isn’t transparency, it’s idiocy. As numerous administration officials have pointed out, the guidelines for the drone program are clear enough that a person could reasonably infer whether they might be on the list. Are you in al Qaeda, or something like it? Duck and cover.

As I’ve said before, it’s also reasonable to believe that those on the “kill list” deserve due process, but if that’s the case, you’ve got to stop treating counter-terrorism as a war. Adding some kind of FISA-esque kangaroo court to the mix and calling it “due process” would only worsen the problem, because then you’re perverting due process, rather than simply denying it applies.

Lawrence O’Donnell thankfully went on to challenge all of this “Stand With Rand” flawed-messenger garbage, calling Paul “stark-raving mad,” a “psychopath,” and explaining that if you “Stand With Rand,” then “you are standing with a crazy person.”

In case you didn’t have the stomach (or the bladder) to catch all of Paul’s filibuster, Wonkette’s Gary Legum pulled out just one of many overlooked nuggets:

You get to the Lochner case. The Lochner case is in 1905. The majority rules 5-4 that the right to make a contract is part of your due process. Someone cannot deprive you of determining how long your working hours are without due process. So President Obama’s a big opponent to this, but I would ask him — among the other things I’m asking him today — to rethink the Lochner case. . . . I think it’s a wonderful decision.

As the right-wing fascists at ThinkProgress point out, Lochner v. New York “is widely viewed as one of the worst Supreme Court decisions in American history,” and is routinely taught in law schools alongside Plessy v. Ferguson as an example of ways in which judges should not interpret the Constitution. In Lochner, a bakery owner sued New York State over a law regulating working conditions in bakeries. The Supreme Court found in the owner’s favor, ruling that something called “liberty of contract” was implicit in the due process clause of the Fourteenth Amendment, which made the New York law a labor law that interfered with the right of the bakery owner to dictate terms of employment, in this case the right to force his employees to work more than ten hours a day and sixty hours a week.

Liberals and mainstream types who want to praise Rand Paul’s 13-hour nonsense filibuster of John Brennan’s nomination for CIA director just because he got us “talking” about drones are going to regret staking out that position (and no, that’s not a threat), because there’s actually another guy who wants to talk about drones, and greater transparency. His name is John Brennan.