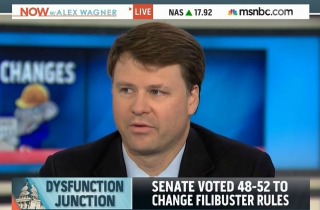 Huffington Post reporter Ryan Grim offered an interesting observation on MSNBC’s Now on Friday. Senate Democrats invoking the “nuclear option” and reforming Senate rules to prevent Republicans from filibustering President Barack Obama’s nominees has already possibly resulted in some unforeseen consequences. For example, at least one judicial nominee that is so unfriendly to the investor community that he would cause the White House more headaches than anything else is now likely to be confirmed.

MSNBC host Alex Wagner asked Grim for his thoughts on the “nuclear option,” noting that the D.C. Circuit Court not only deals with interpreting legal matters but regulatory matters as well. In that sense, she said, nominating like-minded judges to that Court is critical for ensuring the legacy of the Obama presidency is a lasting one.

Grim agreed with this assessment. “That’s the accusation Republicans are making,” he observed. “That what this will allow him to do is to put partisans in place and regulatory agencies who will then write rules that will be rubber stamped by the D.C. Circuit Court.”

“What it allows them to do is remove folks and maybe get people in there,” Grim continued. “[Acting director of the Federal Housing Finance Agency] Ed DeMarco, who oversees federal housing finance, who the White House has wanted to get rid of for a long time, can now be pushed aside because [former Democratic Rep.] Mel Watt can get through the Senate.”

“When they named Mel Watt, I don’t know if they ever actually expected him to get confirmed,” he continued. “Mel Watt is going to do some things to make people unhappy. He will probably make it easier for borrowers to refinance their loans, which is not good for a lot of investors who have a lot of friends in the White House as well.”

Perfect. A far-left judicial nominee, proposed only to keep the Democratic “activist base” in line but who no one ever thought would be confirmed, will now fracture the Democratic Party by inflaming tensions between the left wing and the liberal donor class.

How can one simultaneously claim that the Senate Democrats’ “nuclear option” was both a sound strategic decision and at the same time acknowledge that it is going to frustrate the leader of the Democratic Party by making his efforts to placate the base take on real consequence? An honest analyst cannot reconcile these two things.

This is yet another reason why it is more likely that Democrats in the White House and the Senate, motivated by the panic that overtook the party as the Affordable Care Act’s implementation took a toll on their party’s standing in the polls, is carelessly seeking to mitigate their losses by taking excessive risks.

It is clear that the present strain of Democratic thinking is going to result in short-term gain only to be greatly offset by long-term, structural loss. But Democrats are no longer thinking long-term. They are rattled and are compounding mistake with even greater mistakes. Once this cyclical behavior pattern begins, it becomes difficult to reverse.