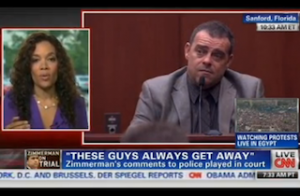 According to commentators on Fox News, the defense has been catching most of the breaks in the George Zimmerman murder trial. But as one CNN legal analyst pointed out today, the prosecution had a good morning when lead detective Chris Serino testified that Zimmerman could have been “profiling” Trayvon Martin the night he was killed.

“If I were to believe that somebody was committing a crime, could that not be profiling that person?” prosecutor Bernie de la Rionda asked Serino. After objections from the defense were overruled, Serino answered, “It could be construed as such, yes.”

CNN legal analyst Sunny Hostin called Serino’s answer “incredibly important to the prosecution” and said she saw a “sea change” in the case based on de la Rionda’s entire redirect. Hostin admitted that at times she’s felt like “the only person in the world that believed the prosecution was doing well,” but now she’s seeing more people come to her side. “This was a huge win for the prosecution today,” she said, also pointing to the moment when Serino “conceded that the term ‘f’ing punks,’ the terms that George Zimmerman was using, was evidence of ill will, hatred, spite.”

What the prosecution needs to prove in the case, Hostin said, “to refute self defense that George Zimmerman was the first aggressor, that he followed, that he profiled, that he pursued, that he confronted. Well, now Detective Serino conceded that.”