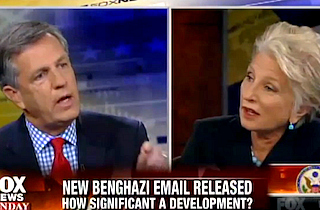 Fox News analyst Brit Hume got into it on Fox News Sunday with former Representative Jane Harman (D-CA) over her claim that Benghazi was an “intelligence failure” rather than a conspiracy to deceive on the nature and origin of the attack on the American compound in Libya.

“You’re right, there wasn’t a conspiracy in the United States to mount the Benghazi attack,” Hume said. “That’s not the question. The question was whether in the aftermath of the attack, when the administration sent its UN ambassador out to explain it to everybody, and she did so falsely, that there wasn’t a conspiracy to create the false talking points that she used. I’m not talking about the CIA talking points, I’m talking about the talking points used on that program that day, which were monumentally misleading, that since have been shown to be false, and based on no intelligence that we know of.”

“Ben Rhodes talks about the video five times in this memo,” Wallace added, referring to the recently released memo from the Deputy National Security Advisor about the Benghazi talking points. “Five times.”