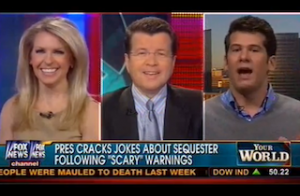 President Obama delivered a comical monologue at this past weekend’s annual Gridiron Club Dinner, and while no video cameras were allowed inside, the White House did release a full transcript of his remarks. And this afternoon, Fox News’ Neil Cavuto questioned the president’s decision to joke about the sequester just one week after he was making dire predictions about its economic consequences.

Crowley said that it’s “nice to see the president making jokes,” adding that it “humanizes” him, but she took offense to the specific jokes about the sequester. Before insisting that she does, in fact, have a “sense of humor” she said his willingness to joke about a budget cuts “shows how fundamentally unserious he is about tackling the huge issues of reigning in government, cutting spending and bringing under control this national debt.”

Next up, Crowder, the “comedian,” took his objections even further, arguing that Obama’s decision to make jokes about the sequester somehow demonstrates his lack of values. Crowder immediately began to paint President Obama as a perpetual flip-flopper, saying he was “against the wars, until he decided to continue them” and “against same-sex marriage under his voter base changed.” Of course, the reality is that Obama’s focus on Afghanistan over Iraq was always a part of his presidential platform and has not changed. And though his views on same-sex marriage have evolved, he has remained open and honest about that “evolution.”

Crowder went on to conclude that after this latest inconsistency, in which Obama warned that the sequester would “end the world” a week before he made jokes about it, the president either “fundamentally changes all of his values wildly on a day-to-day basis” or has “no values and all his decisions are made out of political expediency.”

Without quite acknowledging Crowder’s damning accusations against Obama, Cavuto turned back to Crowley, who argued that perhaps the president is only joking about the sequester now to avoid admitting he “wrong” about what its economic impact would be.

At this point, Crowder jumped back in, exclaiming that whether Obama knew he was overestimating the impact or not, “he was wrong and he needs to come out and say, ‘I screwed up, that’s one for you America.’ Instead he makes jokes like it never happened.”

From time to time, whether it’s the White House Correspondents Dinner, the Alfred E. Smith Dinner or the Gridiron Club Dinner, presidents are called upon to make jokes about the news of the moment, often at their own expense. These aren’t serious political speeches that presidents fill with jokes to avoid discussing pressing issues. They are venues specifically designed for presidents to communicate with the press (and to some degree the American people) in a humorous way, often bringing a new perspective to issues through comedy.

It’s no coincidence that Obama decided to open with jokes about the sequester at Saturday’s event. The four, short jokes he told at the top of his speech weren’t the funniest he’s ever delivered, but they did serve to acknowledge, with humor, the criticism he has received for “hyping” the budget cuts.

Before I begin, I know some of you have noticed that I’m dressed a little differently from the other gentlemen. Because of sequester, they cut my tails.

My joke writers have been placed on furlough.

I know a lot of you reported that no one will feel any immediate impact because of the sequester. Well, you’re about to find out how wrong you are.

Of course, there’s one thing in Washington that didn’t get cut — the length of this dinner. Yet more proof that the sequester makes no sense.

He wasn’t making jokes to pretend the sequester “never happened,” as Crowder suggested. Rather, Obama used the mostly self-deprecating jokes to let the media know he’s aware of what they’re saying about him, and perhaps he agrees to a point, but he’s not quite willing to admit that he exaggerated. And with just a week having passed since the budget cuts went into effect, the record-high Dow alone is not evidence enough to prove him wrong.

As a “comedian,” Crowder should know that jokes are regularly used to add satirical commentary to serious issues, not to simply put on a happy face and pretend everything is perfect. It is entirely possible for someone to have serious opinions about an issue and at the same time be able to make jokes about it. Just look at comedians like Jon Stewart and Bill Maher.

The president took a lot of heat for making a joke about predator drones taking out the Jonas Brothers for hitting on his daughters at the 2010 Correspondents Dinner, and that was way before Rand Paul single-handedly made drones a household obsession. Yes, the joke was about a serious topic, but it was a joke, told in a comedy setting. There’s nothing funny about the attorney general hedging on killing American citizens on U.S. soil with drones, but President Obama threatening the Jonas Brothers by saying, “Two words: predator drones?” You have to admit, that’s pretty funny.