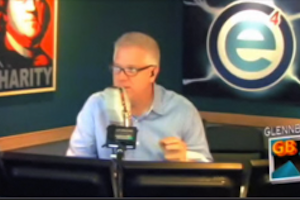 Today, President Obama made some big claims, calling for the US to reduce oil imports by a third in the next 10 years thus continuing to check off the “Promise to get rid of foreign oil” item in his Required American Presidential Promises to-do list. Glenn Beck saw some holes in the promise but, being the helpful guy he is, used the power of hypnosis to clear them up for the American people.

Using some kind of voice filter (radio magic!), Beck sent this message out to the nation:

“Alright, American people, listen carefully. You’re asleep. Now, when I wake you up, I want you to know that this whole oil thing, we just need to get off it. We’re gonna reduce our energy by 30%. We’re just gonna do that. And when you wake up, you’re gonna say, ‘I don’t need 30% of the energy. I’m gonna reduce my energy by one third and I’m still gonna produce. And I’m still gonna do anything.’ And we’re going to reduce our dependence on foreign oil. And I want you to forget, right now, that the President was just down in Brazil saying, ‘We’re going to help you explore, Brazil. We’re gonna give you the money. We’re gonna help you explore. And then, we’re gonna be your best customer!’ I’m sorry, you’re still asleep. Forget that he said that last weekend!”

Fun little segment but definitely a little dangerous. Not only could this have catered to the fun folks out there that still believe Obama’s a scary mind controller, there could have been listeners driving when Beck told them to fall asleep! That voice changer was soothing!