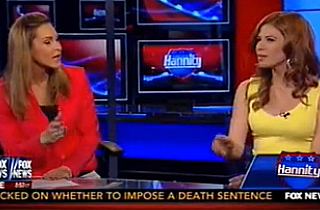 Guests Tamara Holder and Michelle Fields were going head-to-head over whether Levine’s silly “I hate this country” comment means he actually hates America before things somehow got even sillier.

“You think it’s appropriate to call a mother that name?” Hannity asked Holder.

“You actually said that on Hannity’s show one time. You enjoy being called that,” Fields chimed in, before this particular exchange happened [emphasis added]:

HOLDER: First of all, I’m not a mother. Second of all, you don’t have to personally attack me for what I said.

HANNITY: You don’t find that offensive?

FIELDS: I’d rather be respected.

HOLDER: Well, guess what? We can have a difference of opinions, and that’s what makes America great.

And… so… that happened.