‘I Am Bradley Manning’: Celebrities Line Up For Video Supporting Embattled Military Whistleblower 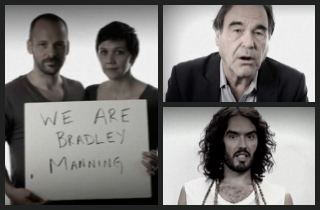 Each speaker takes their turn declaring that they or we “are all Bradley Manning,” imploring viewers to put themselves in a similar situation to Manning’s. “What would you do,” they ask, if you were faced with the decision to leak non-life-threatening information that evidenced “war crimes” and “awful things” and deserved to be in the public domain?

“It’s very hard for a lower-level soldier to turn on his officers and saw there was a war crime here,” filmmaker Stone lamented.

Although the documents he leaked have repeatedly been identified — including by government officials — as having no life-threatening effects and causing minimal to no national security harm, Manning faces a potential life in prison for, among other charges, the capital offense of “aiding and abetting the enemy.”

“It’s an absurd charge,” fellow whistleblower Daniel Ellsberg says in the “I am Bradley Manning” video. Ellsberg famously leaked the so-called “Pentagon Papers” in 1971, helping shine a light on the mismanagement behind the United States’ involvement in the Vietnam War.

“I was Bradley Manning,” the former whistleblower says, clearly acting as the centerpiece of the video.

Watch below, via I am Bradley Manning: