‘I Could Really Care Less’: Hillary Responds to Trump Calling Her ‘Crooked Hillary’ 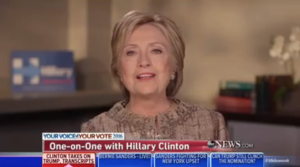 During her appearance on This Week, Hillary Clinton responded to Donald Trump‘s rally this weekend, where he floated the new nickname he’s got in mind for her.

Throughout his campaign, Trump has assigned unflattering nicknames like “Low-Energy” Jeb Bush, “Little” Marco Rubio, and “Lyin” Ted Cruz in order to rev up his supporters against the opposition. When George Stephanopoulos asked her how she felt about this, Clinton said that she doesn’t bother herself with Trump’s “string of insults.”

“What I’m concerned about is how he goes after everybody else,” Clinton said. “He is hurting our unity at home, he’s undermining the values we stand for in New York and across America, and he’s hurting us around the world. He can say whatever he wants to say about me. I really could care less.”

CLINTON: I don’t respond to Donald Trump and his string of insults about me. I can take care of myself. I look forward to running against him if he turns out to be the Republican nominee if I am the Democratic nominee. What I’m concerned about is how he goes after everybody else. He goes after women. He goes after Muslims. He goes after immigrants. He goes after people with disabilities. He is hurting our unity at home. He is undermining the values that we stand for in New York and across America. And he’s hurting us around the world. He can say whatever he want to say about me. I really could care less.

I’m going to stay focused on the issues because there are stark difference between where I think our country needs to be headed and where he would turn us back and undermine the progress that we’ve been making. So when I talk about jobs, when I talk about climate change, when I talk about equal pay, when I talk about a woman’s right to make her own healthcare decisions, and so much else, I know that he doesn’t believe any of that. And that in this campaign he wants to set Americans against each other and I’m not going to stand for it.

Trump’s name, of course, comes from the fact that Clinton still faces questions regularly over her email scandal, the Benghazi incident, and other questionable points of her history. Clinton went on to say Trump has no interest in talking about actual political issues, nor does he really care about them.

“In this campaign, he wants to set Americans against each other,” Clinton said. “I’m not going to stand for it.”