‘I Give Up’: Battle Cry of the Privileged
guest column

‘I Give Up’: Battle Cry of the Privileged 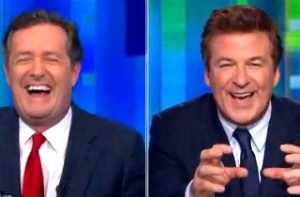 CNN announced it plans to end Morgan’s prime-time show, and Alec Baldwin penned a column for New York magazine hilariously titled “I Give Up.”

And while Morgan and Baldwin are taking a hiatus from their prominent pedestals for different reasons, the paths that led them to this moment are remarkably similar.

Morgan supposedly lost his prime-time spot because the ratings for his show suck, but he never had a consistently large audience, so pinning the blame on low audience numbers is an incomplete picture of what happened. The New York Times‘ David Carr has a weird nationalistic take on what he thinks went down, blaming the show’s cancellation on Morgan’s infatuation with soccer and gun regulation. And while I don’t doubt Morgan received tons of backlash for his stance on gun control, the show wasn’t cancelled in the midst of his post-Sandy Hook rants, but rather after his run in with organized activists on Twitter following his abysmal interview with transgender activist Janet Mock.

Without question, Morgan prefers to hang on the cross and blame the cancellation on his heroic stance on gun regulation.

“Look, I am a British guy debating American cultural issues, including guns, which has been very polarizing, and there is no doubt that there are many in the audience who are tired of me banging on about it,” he said.

But does anyone really hold Morgan’s Britishness against him? I certainly don’t care if he’s British, or loves soccer. My problem with Morgan is that he’s an egotistical hack, who was embroiled in the phone hacking at the Daily Mirror (Morgan was recently questioned by police regarding his involvement in the scandal), and who misgendered Janet Mock and then went to war with activists.

Right-wing zealots going after television personalities is nothing new, but the reason Morgan didn’t receive the same amount of love as, say, a Melissa Harris-Perry, is because he’s a highly unlikeable, hyper-sensitive creep who oozes privilege. Like Martin Bashir, Morgan didn’t have a base to run to his defense because, frankly, no one likes him very much. Have you ever met a diehard Piers Morgan fan? If you have, I bet you lasted two minutes talking to them because they were probably a giant weirdo.

And again, this has nothing to do with the fact that Morgan and Bashir are British, but rather that they’re hacky, uninspiring, and boring. I’d rather watch Olympic curling than hear how Bashir thinks Sarah Palin is dumb or witness Morgan exercise his male privilege for the trillionth time. Fart. No thanks.

And even though we all love Baldwin because he was very good on that show where Tina Fey and her writing staff wrote all his funny lines, it quickly became clear that Alec Baldwin is a giant fucking asshole, the very worst example of a limousine liberal.

Baldwin demonstrated how much he’s grown and matured by dropping the derogatory term “tranny” in the midst of his explanation:

I met with Nick and others from two LGBT organizations. We talked for a while about the torment of the LGBT life many of them have lived while growing up in traditional Hawaiian families. Macho fathers. Religious mothers. We talked a lot about words and their power, especially in the lives of young people.

One young man, an F-to-M tranny, said, “Are you here to get dry-cleaned, like Brett Ratner?” Meaning I could do some mea culpa, write them a six-figure check, go to a dinner, sob at the table, give a heartfelt speech, beg for forgiveness. I thought to myself: Beg for forgiveness for something I didn’t do?

I mean, has there ever been a more beautiful demonstration of privilege than this column?

Baldwin is supposed to be apologizing here, but can’t resist throwing in that he didn’t even doing anything, you guys! He’s a victim, akin to Matthew Shepard. He’s getting dry-cleaned by the pink mafia!

In other words: I want to sit with some queer activists for fifteen minutes and then go back to my mansion so everyone will STFU.

Baldwin’s main grievance appears to be that technology permits individuals to capture his terrible behavior. He writes, “I haven’t changed, but public life has,” “Everyone has a camera in their pocket,” and “You’re out there in a world where if you do make a mistake, it echoes in a digital canyon forever.”

Now, here’s the thing: I believe everyone has the right to take a mental vacation. I’ve seen some of my friends (primarily women journos and activists) be relentlessly hounded by anonymous internet trolls, bullied and threatened with rape threats, until they left their online lives just to preserve their sanity. But let’s be very clear that what Morgan and Baldwin are describing is entirely separate from the noble existences of persecuted activists. Men like Morgan and Baldwin are accustomed to holding all the power, which is why they’re mystified and peeved by the public backslash they’ve received for, in most cases, being privileged little dicks.

Morgan never really understood the backlash he got for the Janet Mock interview. When Stephen Colbert, a comedian (and no stranger to trans-misogynistic jokes himself), did a better job of interviewing Mock, Morgan’s first response was to take to Twitter and accuse Mock of “whining” and to call Colbert an “enabler,” which is a funny way to say superior interviewer.

But Morgan, like Baldwin, never really wanted to learn from his mistakes. He wanted the bad ol’ Twitter people to leave him alone, to rant without consequence to his not-very-large audience, and to never be help accountable. Because he’s a white dude, and that’s what he expects.

I don’t think it’s a coincidence that Morgan and Baldwin are announcing a reduction in their public appearances around the same time. Twitter and the rise of alternative media have allowed the audience to talk back to media figures who previously never heard feedback from the unwashed serfs. And white dudes, historically the most privileged and most unchallenged in our society, are really unhappy about the turn in events.

Put another way: they give up.

This is a luxury only afforded to the privileged, who can supplement their previous jobs with new offers or savings. It’s not so easy for an activist, blogger, or non-televised journalist to make the same decision, even if they’re receiving much more serious, scary threats than the ones directed at Morgan. I have an acquaintance who had her home address publicly published by a harasser, which resulted in her and her entire family being rushed from their home by police. That woman still blogs publicly because she has to in order to pay her bills. She can’t give up.

It’s a cruel twist of fate that those among us who are most victimized and abused, the transgender activists Morgan mocks, and the LGBTQ individuals Baldwin considers his punchlines, cannot use the emergency exit as easily as their abusers.

— —
This piece originally appeared at AllisonKilkenny.com, a site run by Allison Kilkenny. She is an independent journalist and co-hosts Citizen Radio, the alternative political radio show alongside her partner, comic Jamie Kilstein. She was previously a contributing writer for The Nation, In These Times, and Truthout. More of her work can be found here.

– The Poster Boy For Unending War
– “Sky Raper”: Drones are tools of the patriarchy