‘I Was Labeled a Rat’: VA Whistleblowers Testify They Were Victims of Retaliation 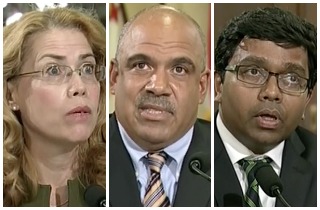 Several VA whistleblowers testified to the House Veterans Affairs Committee Tuesday night that there is a disturbing culture of intimidation and retaliation in the VA against anyone who speaks out about any wrongdoing. One of the whistleblowers was Dr. Katherine Mitchell, who blew the whistle on wait times for medical treatment at the Phoenix VA facility where the outcry over VA mismanagement burst from last month.

Mitchell told the House committee last night that the VA has “routinely intimidated any employee who brings forward information that’s contrary to the public image that the VA wishes to project.” She explained how, when she warned that the ER “was too dangerous to remain open” and should be shut down until they got more resources, she was scolded for her “lack of communication skills” and transferred.

RELATED: VA Whistleblower: Vets’ Treatment ‘Worse Than if They Hadn’t Been Treated at All’

Dr. Christian Head, who worked at the Los Angeles VA, explained that after he testified against VA fraud, nothing much happened to the people who were at fault and instead, he was mocked and “labeled a rat” by all of his colleagues. Dr. Jose Mathews, who worked in St. Louis, said he was “professionally assassinated” for speaking out.

During the hearing, VA official James Tuchschmidt, the number two at the Veterans Health Administration, offered an apology to “everyone whose voice has been stifled” and said he’s “very disillusioned and sickened” with what’s happened.

You can watch selections of the testimony here, via C-SPAN 2: