‘I Will Tell It Like It Is’: Corey Lewandowski Makes First CNN Appearance as Commentator
video

‘I Will Tell It Like It Is’: Corey Lewandowski Makes First CNN Appearance as Commentator 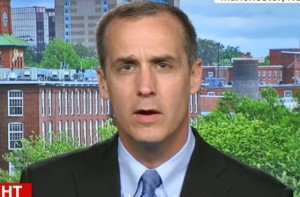 Lewandowski gave his first interview since Trump fired him to CNN this week, and Mediaite reported earlier that Lewandowski had been offered the gig before the interview. A CNN spokesperson later denied that report.

His hiring was particularly notable given 1) the likelihood that he signed an NDA that forbade him from criticizing The Donald, and 2) his hostility to the media and CNN in particular.

So tonight, Erin Burnett started things out by pressing Lewandowski on the confidentiality agreement he signed and “whether you’re gonna be able to say what you really think.” Lewandowski said he will always say what he thinks and “will tell it like it is,” but he won’t divulge personal details from the campaign.

Burnett asked again if he would ever say anything bad about Trump. Lewandowski simply said he would speak his mind.

Burnett proceeded to go down a list of other Trump campaign issues with him, from a company that the campaign gave a curious amount of money to to the potential VP list. Lewandowski didn’t really provide any specifics on the latter (except that there are no more than 4 names on the list), and said the former wasn’t under his purview.

In fact, the whole interview basically just sounded like he was still on the Trump campaign.