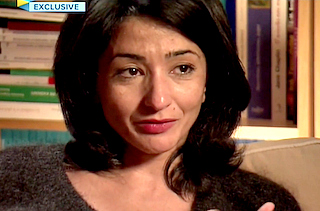 In a tearful interview Jeannette Bougrab, girlfriend of Charlie Hebdo Editor in Chief Stéphane Charbonnier, recounted the hours after she learned of the terrorist attack at the offices of the magazine that killed Charbonnier.

“When I heard some news, I tried calling him but he didn’t answer me,” she said. “He usually answers immediately when I call him. So I called one of his friends and said ‘What happened?’ He said, ‘I don’t know. I don’t know.’ So I took a cab and I got to Charlie Hebdo. I — I was very weak. I saw a lot of policemen and the French president was here and I asked him, ‘Where is Charb?’ and he didn’t answer me. And the guy said, ‘He died.’

RELATED: Girlfriend of Charlie Hebdo Editor: ‘He Knew He Would Die’

“And so I stayed out on the street and it was very cold. After several hours on the street, the doctor took me into the hospital and I say to my love, goodbye. I kissed his hands. And I kissed him on the lips….I said a lot of stupid things. I said, ‘I love you.’ What can I say?”