If Lawrence O’Donnell Cares So Little About Donald Trump, Why Is He Still Talking About Him? 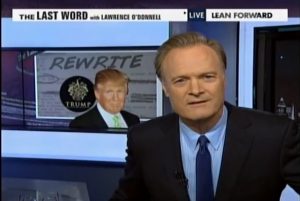 In tonight’s “Rewrite” segment, MSNBC’s Lawrence O’Donnell turned his focus to… Donald Trump? He does understand that, at this point, discussing Trump as a political figure is akin to touting Silly Bandz as the hot new fashion trend, no?

O’Donnell kicked things off by saying he “doesn’t know” what Trump is like as a person:

I don’t know the person his children know as their father. I don’t know the man his wives have known as their husband. I have no idea how kind and good-hearted and indeed lovable he may be to the people closest to him and to the people most important to him. I know only what I see in the fictional version of himself he delivers on TV screens. As I’ve said here before, the people you see inside this glowing box you’re watching right now, including me, all present a television version of ourselves.

Things are getting mad meta!

No matter how often you watch me read this teleprompter, you will never get to know the real me. The real me lives outside this box. And doesn’t wear makeup. Well, ok, doesn’t wear as much makeup as I do now.

So we can never get to know the real Donald Trump by watching him on TV.

O’Donnell then discussed Trump’s “fake reality show” (as if there is any other kind) for some length, prompting the question, “What is the point of all this?” Trump is no longer trying to convince anyone that he may run for president, or any other political office, and, as such, does not pose a threat from which O’Donnell must single-handedly protect America’s poor confused masses.

The segment segued into discussions on former California governor Arnold Schwarzenegger, painting both men as “braggarts” whose bravado and ego far outshine their political know-how and ability to govern. But, again, what is the point? That some people who run for office are in it for the glory? That actors are egomaniacs? That egomaniacs make poor leaders? That bad actors should refrain from running for office and save that sort of thing for better, more liberal performers, like Al Franken or Jerry Springer?

Maybe O’Donnell’s obsession with Trump could have been painted as a noble and heartfelt means of informing the American public about the racism or ignorance embodied by a man whom he thought would never actually officially run for president in the first place. But, at this point, bringing up “scandals” like Trump’s 2007 diss of Rosie O’Donnell makes O’Donnell, not Trump, look out of touch. But never some sort of braggart.

As much as I disagree with most things O’Donnell says – even as I find myself absolutely delighted by his wry sense of humor and his unintentional comedy – I concede that he’s a bright man, a funny man. A man out for ratings, sure, and a man who is no stranger to crafting drama for the entertainment world. But he is better than this. Talking about Trump as if the man is some parasite in a flashy suit only works to bring O’Donnell down to his level.

We are, after all, what interests us.

Watch the segment for yourselves, via MSNBC: