Every now and then a totally weird, but incredibly endearing person finds its way into the local news spotlight, armed with potent quotables and sometimes an ax.

Our last major local news celebrity was Kai, the hatchet-wielding hitchhiker with a troubled past, but he turned out to have possibly murdered a man — leaving everyone brokenhearted at the possibilities.

And then today we discover his possible heir: Sir John Michael of Oklahoma. 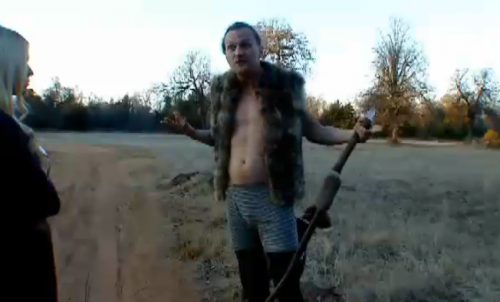 He’s a cross between The Dude and Conan the Barbarian — part psychedelics-tinged philosopher, part macho man who just wants to work on his car.

And in Lebowski fashion, he’s the hapless protagonist caught between the law and criminal elements.

The backstory: Oklahoma County police heard reports of gunfire from the home rented by Sir John Michael. Turns out, it wasn’t gunfire, but just him getting frustrated while repairing his car. But police searched the premises anyway and found a shitload of marijuana, which belonged to Michael’s landlord.

News9 got the chance to interview Sir John Michael for his perspective, and oh wow, he’s one heroic weirdo. To the highlights:

Watch below, via News9: