If Syria Uses Chemical Weapons, The World Must Intervene And America Must Lead 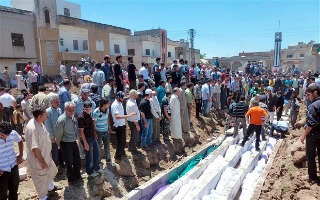 The Syrian government has begun mixing chemicals required to produce sarin nerve gas. Satellite images have shown the Syrian army moving its chemical weapons assets for several months, but this final step to using those weapons on the battlefield has alarmed the global community. President Barack Obama and the State Department have issued clear and stern warnings to the Syrian government and President Bashar al Assad that the retaliation he would face would be devastating. While there is a global consensus around the proscription against the use of weapons of mass destruction, there is no tested mechanism which triggers a global response in the event of their use. If Damascus takes this final and suicidal step, the United States must lead the world to bring the civil war in Syria to a swift conclusion. The benefits to the world, and particularly the West, following a successful intervention in Syria would be tangible. The consequences of failure, on the other hand, could be dire. The U.S. has abdicated in its responsibility to prevent this tragedy before it occurs. Should the unthinkable happen in the Middle East, the U.S. has an obligation to make sure that such an atrocity never occurs again.

On Fox News Channel on Tuesday, a discussion about Syria’s potential use of chemical weapons resulted in the consensus that Syria has no reason to believe it would face catastrophic consequences from a united global front. In fact, there is limited historical evidence available which may persuade Syria that they will face any, let alone certain, consequences if Damascus choses to escalate the long-running civil war:

The United States has an obligation should such a disastrous and unprecedented eventuality take place in Syria. The U.S. must lead the world to make good on their lip service – America must cajole a reluctant world to either participate in or abstain from opposing a grand intervention in Syria.

That is no simple task, but the goals that the United States would pursue in such an adventure are both desirous and accomplishable.

The first and most important is the establishment of a precedent for a united front opposed to the use of weapons of mass destruction on any nation’s own citizens. For the moment, there is only the presumption that the preponderance of the world’s responsible nations will come together and punish a state which violates the norms that prohibit the use of weapons of mass destruction. Should Syria choose to test that theory, the globe’s rogue powers will be watching closely. Syria must be taught the unambiguous lesson that there is a global order.

But America is war weary. The nation is tired of conflict and there is little political will to pursue a potentially bloody intervention in another civil war in the oft-intervened in Middle East. However, every political faction in the United States has interest in a successful intervention in Syria.

There are conservative and realist as well as progressive and internationalist reasons to support an intervention in Syria. All the justifications used by the White House (without consulting Congress, as the slighted legislative branch has not yet forgotten) to intervene in Libya during their civil war apply to Syria.

The internationalist principle of “right to protect,” which supposes that industrialized nations in the West have a moral responsibility to use their advanced power-projection capabilities to reduce the incidence of tyrannical governments slaughtering helpless civilians under their sovereignty wherever possible, was invoked as one of several reasons to intervene in Libya. The principle of “R2P” applies in spades to the nearly two-year-old civil war in Syria.