If Walter White Had Obamacare 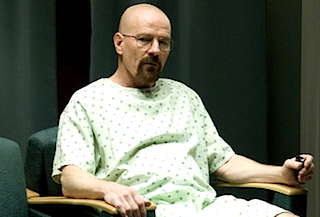 For reasons that will become obvious, this post has major spoilers from last night’s series finale of Breaking Bad.

Would Hank and Gomie be buried six feet down in the middle of a New Mexico desert? Would Flynn still proudly call himself Walt Jr.? Would Skyler be working part-time as a taxi dispatcher? Would Jesse have lost the two loves of his life? If Walter White had Obamacare, would he still be alive?

The confluence of the Breaking Bad series finale and the looming government shutdown over the implementation of the Affordable Care Act has been causing pop culture and political pundits to ask what might have been different had President Obama’s signature legislative achievement been in place when the fictional world of Breaking Bad began back in 2008.

In the week leading up to last night’s finale, the Walter White/Obamacare theory popped on in two very different ways on two very different NBC late night shows. First Jay Leno jumped on the train with a monologue joke that “spoiled” the ending of the series by revealing that White would finally succumb to cancer “in hospital waiting room while filling out all the paperwork for Obamacare.” Then, on the season premiere of Saturday Night Live, Aaron Paul, as his character Jesse Pinkman, showed up in a cameo alongside Jay Pharoah’s Obama to share the heartbreaking story of his chemistry teacher turned meth cook who could have been saved if only he had access to quality, affordable health insurance.

Neither joke was particularly kind to Obama and the law, but they do represent well the divergent attitudes on the issue from those who think Obamacare will “literally kill women, children and seniors” on one side to those who recognize it for what it is: the best compromise our political system was capable of coming up with to help insure 30 million uninsured Americans.

Using Walter White as an example of an American who gets sick–seriously sick–and finds he can’t afford to pay for the treatment that would save his life, two articles published in the last 24 hours look at how the Affordable Care Act may or may not have helped. First, The Daily Beast’s Jamelle Bouie described how Obamacare would have helped White (and in turn ruined Breaking Bad). Then, in a rebuttal, Business Insider’s Josh Barro explained how little Obamacare would have changed things for the character.

Bouie argued that one of the biggest problems for White was likely the lifetime limits placed on policies by insurance companies, a restriction that Obamacare eliminated back in 2010. That would have helped, but not as much, she argues, as if the narrative began next year:

If the series had started in 2014, the year Obamacare is fully implemented, White would have had few financial worries. Not only is that the year the law bans annual limits on insurance coverage, but it also puts a cap on out-of-pocket expenses for families and individuals. At most, the White family would have had to pay $12,700 for Walt’s care. A large sum, but not so much that it makes sense to go into the meth-dealing business.

With Obamacare, Walter White’s life wouldn’t have made very good television. After all, who would want to watch a show about the humdrum life of a high school chemistry teacher with decent health insurance?

However, Barro counters that “the ACA would likely have done nothing to help Walter White. And that’s actually a feature of the ACA, not a bug.” He points out that White did have health insurance as a public school teacher, but his family urged to seek the expensive care of a “superstar oncologist” outside of his network, a problem that Obamcare does not solve.

While Barro admits that people without health insurance will benefit from Obamacare, he argues that it won’t do much to help those who currently do have coverage. He writes:

Helping people get astronomically expensive hail-mary treatments for late stage cancer is a much more dubious policy goal; we shouldn’t necessarily expect the law to help people get the sort of treatment Walt had to go to such great lengths to obtain.

There is a voice for this idea on Breaking Bad: Walter White himself, who initially resists his family’s pleading, arguing that treatment is likely to be expensive and unpleasant and ineffective. Of course, on the show, the treatment ends up greatly extending Walt’s life span, because “Man gets expensive cancer treatment, becomes too sick from chemotherapy side effects to run his meth lab, dies anyway, and leaves his family penniless” is not a very interesting television plot.

There are good points on both sides of this highly hypothetical argument. Obamacare may have helped the White family feel more secure in their finances after Walter got his diagnosis, but it may not have gotten him the “special” treatment that, even after the law is implemented, only money will be able to buy. But of course, for anyone who watched the show through last night’s finale knows, Walter White is not your average American, let alone your average human. He resisted the expensive treatment, not only because he couldn’t afford it, but also because he didn’t want it.

In the world of Breaking Bad, Walter White’s cancer gave him a new lease on life and the ability to break free from the constraints of deadening domestic existence he had come to accept as the only option. As he says in his final scene with his wife Skyler, he was never cooking meth for his family. “It was for me,” he admits. “I liked it. I was good at it. And I was really—I was alive.”

Obamacare isn’t meant to help people like Walter White, who see cancer as a chance to “Live Free of Die” with no regard for their fellow human beings and the good of society. Maybe that’s why tea party conservatives hate it so much.