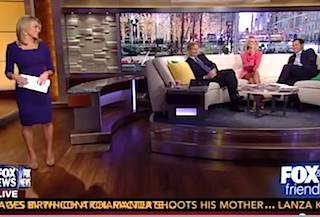 Guess it’s just one of those days. With Thanksgiving less than 48 hours away, things got even more “relaxed” than usual on Fox & Friends Tuesday morning, with host Brian Kilmeade making an offer to anchor Heather Nauert that could very easily be taken the wrong way.

It all started after a commercial break during the final half-hour of the show, when Steve Doocy noticed that Kilmeade was visibly slumping on the show’s couch. “What are you doing over there?” he asked. “You know we’re doing a TV show?”

Kilmeade explained that he was simply emulating the show’s earlier guest Nicollette Sheridan, who struck a similar air of repose. “She is so relaxed on this couch,” he said. “I’ve never seen anyone so comfortable here.”

“It’s a vacation week,” Doocy said, explaining the chill vibe on set. “Today is kind of the Wednesday because we’re in the middle of the week. Tomorrow is gonna kind of be Friday even though it’s Wednesday. We got Thursday and Friday off.”

All of a sudden, Nauert, who had been waiting to deliver her next report, chimed in from off-screen. “Wait, you have Thursday and Friday off? No fair, I’m working, thanks a lot.”

“Thanks for being happy for us,” Kilmeade responded, before she asked him if he would come over and make her Thanksgiving dinner. “Sure,” he said. “I’ll jam some stuffing.”

That comment drew gasps and guffaws from off-screen and a good long pause before Elisabeth Hasselbeck said, “I wouldn’t accept that offer.”