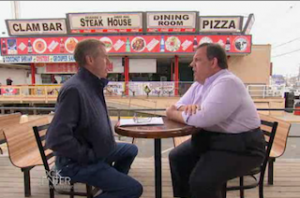 Governor Chris Christie recently sat down with Brian Williams on the Jersey Shore boardwalk for NBC’s Rock Center. The full interview airs Friday night, but in the preview below Christie reveals some information about how he might fit into the Republican Party’s presidential field in 2016.

Williams asked Christie if he does decide to run in 2016, “what Republican Party do you see that would support your candidacy right now? How would you survive a primary process in the current set up of the Republican Party?”

Christie did not indicate whether or not he would run, but he did attempt to affirm his conservative credentials. “I’m a damn good Republican,” he said. “But that does not mean that I would ever put a party before my state or a party before my country.”

Williams also asked Christie about the “political price” he paid for the cooperative and cordial relationship he displayed with President Obama in the aftermath of Hurricane Sandy, including the physical and metaphorical embrace seen around the country in the days before the 2012 presidential election. “I don’t spend a lot of time worrying about it,” Christie said. “Because in my heart, I know I did what was right. And all I did was compliment someone who was doing their job well.”

“I think the people who second-guess this,” he added, “are the typical political arm-chair quarterbacks who never in their lives have had to make a decision like the multitude of decisions I had to make” following the storm.

Whether Christie’s moderate views and friendly relationship with Obama actually hurts his presidential chances will depend in large part on which direction the Republican Party moves between now and 2016.