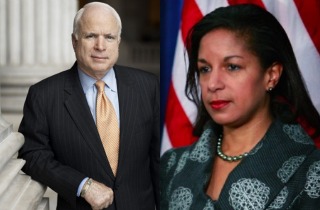 I’m a liberal. Actually, I’m a proud liberal. And the truth is, I think the media narrative taking place on the left about Senator John McCain being a racist is utterly, utterly stupid.

The interesting reality is that I’m both: a woman and a minority. Does this mean that I should never be criticized? Just because my name is Anjali, not Steve, and just because I’m brown, not white, does that mean I shouldn’t be subject to the exact same criticisms as every other human who screws up from time to time? No, it doesn’t. If we, on the left, continue down our path of labelling everyone critical of a woman or minority as a “racist” or a “misogynist,” how long before we allow those groups to live in a perfect bubble where they can never be called out on their mistakes?

Touré, co-host of MSNBC’s The Cycle, has been one of the leaders on this charge and has been very vocal in his criticism of Senator McCain as being a possible racist. But this doesn’t, unfortunately, help the liberal point: It simply opens the door for the right to say we’re trying to distract from having a real conversation about Benghazi. We aren’t. And we need to continue to underscore this point, instead of pushing the “racism” angle.

Now, don’t get me wrong. I did NOT, in fact, say that Senator John McCain was valid in his criticism of Ambassador Susan Rice. He wasn’t. It’s been made pretty clear by now that the intelligence community, not the White House, changed the talking points for Ambassador Rice’s statements on Benghazi in the days following the attack. Senator McCain’s criticism of her is, to say the least, unwarranted and inappropriate and it’s also completely misinformed. What I think happened is that after his very public attacks on the White House for the situation in Benghazi, he couldn’t really figure out to backpedal, so he chose a scapegoat.

I also did NOT, in fact, say that Senator John McCain should be given a pass on his comments. He, after all, called Ambassador Rice “not very bright” and he and Senator Lindsay Graham were extremely hypocritical in their attack on Rice, after not giving the same critical consideration to Condoleezza Rice for her inaccurate comments about Iraq possessing weapons of mass destruction. Senator McCain was overtly vitriolic, unnecessarily angry and generally stepped way over the line. But, do I think he did this because Susan Rice is black or because she’s a woman? Absolutely not. He did it, in my view, because she’s a potential Democratic nominee for Secretary of State, he’s a Republican Senator and the two camps just generally aren’t getting along right now. This doesn’t excuse anything he said: he should NOT be given a pass on his comments, but he also shouldn’t be called a racist.

I also, did NOT, in fact, say that there isn’t racism on the right. In my opinion, there is. Before joining Mediaite, I even wrote a blog on The Huffington Post denouncing Republicans who don’t stand up to their own party. Hatefully attacking a black camerawoman at the RNC and having GOP supporters wear t-shirts that say “Put the white back in the White House” does mean there’s a definite race problem in the Republican Party. Even Colin Powell’s former Chief of Staff acknowledged that there were racists in the Republican party. But that doesn’t mean that everyone who criticizes a minority should be labelled as such.

“Whatever happened to content of character and not color of skin? I mean, everything is flipped: you can’t criticize Susan Rice because she’s black and female, what are the new rules?”

What are the new rules, indeed? It’s up to us on the left to bring the media narrative back to rational, but if we’re the ones leading the charge of stupidity and distraction, calling everyone on the right a “racist” because they criticize a minority, then we’re shutting the door to a legitimate conversation. The liberals on the left should be calling out John McCain for his baseless attacks on Rice because of their content and because of the reality of the Benghazi situation, not stymieing an intelligent discourse by raising the flag of “racism.”

Let’s get it together, liberals, because we need to have a real conversation about the right’s continued hype of the Benghazi story, instead of giving them more fuel for the fire.