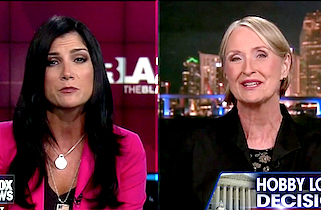 An interruptathon broke out on Hannity Tuesday night over the Supreme Court’s ruling in the so-called Hobby Lobby case that closely-held corporations were not required to cover contraceptives as preventative care in health care plans provided to their employees.

Former National Organization for Women president Patricia Ireland clashed with conservative radio host Dana Loesch over whether the decision was a slippery slope that would allow companies to deny a wide swath of health services and even discriminate against employees based on religious beliefs.

Or at least that’s what I think the debate was about, as the panelists spent most of the segment talking over each other to the point of cacophony. Ireland finally asked if she were going to be allowed to speak or if Loesch was going to “dominate” the show. Loesch then accused Ireland of misrepresenting the Religious Freedom Restoration Act, the 1993 law under which the case was decided.

“I’m sure Patricia is an educated woman, but it does women a disservice when we have women speaking out on this topic and they don’t seem to understand the facts at hand,” Loesch said.

“I understand completely the facts, I just disagree with your conclusions,” Ireland said.

“No, apparently you don’t, so I’m going to educate you,” Loesch said. (She got in a “respect my elders” crack, too.) By that point, though, the segment was out of time.