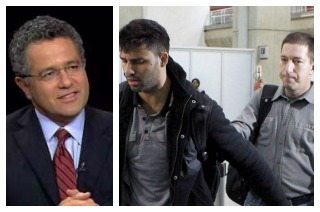 On Tuesday night, CNN legal analyst Jeffrey Toobin articulated a rather mainstream point of view on the British government’s decision to detain The Guardian journalist Glenn Greenwald’s partner, David Miranda, while transiting through Heathrow Airport. Toobin’s analysis, whatever one thinks about how it was said, was factually and legally correct. But you would not know it from the hyperventilating overreaction his comments inspired among members of the political media on the right and the left. In arguing against special treatment for members of the media, he is being savaged by members of that tribe.

Over the weekend, in accordance with the United Kingdom’s terrorism laws, Miranda was detained in a London airport under the suspicion that he was transiting documents relating to the National Security Agency leaks provided to Greenwald by Edward Snowden.

British government’s suspicions in this care were justified. The Guardian has admitted that Miranda has facilitated Greenwald’s work in the past and he was remunerated for it. In fact, The Guardian paid for Miranda’s flights.

“I don’t want to be unkind, but he was a mule,” Toobin said in a split-screen interview on CNN with both Greenwald and Miranda, knowing he was being deliberately provocative. “Our prisons are full of drug mules.”

After Toobin made this statement, the internet erupted with a unique brand of indignation reserved only for slights against the most righteous. Most were probably unaware that Greenwald basically admitted that Toobin was correct, if impolite.

The documents came from the trove of stolen material provided to the two journalists by Mr. Snowden. The British authorities seized all of his electronic media — including video games, DVDs and data storage devices — and did not return them, Mr. Greenwald said.

Toobin’s real offense was to articulate a perfectly defensible point: journalists, reporters and even their significant others are not above the law. At some points it seems team Greenwald is claiming his boyfriend was working with The Guardian and therefore entitled to journalistic protections, yet at other times, Miranda was portrayed as just a partner being unfairly swept up in someone else’s squabble. But it doesn’t really matter. If he was transporting stolen classified documents, he still has a legal problem.

“The word ‘journalism’ is not magical immunity sauce,” Toobin asserted. This is empirically true, if somewhat irksome for government transparency advocates. Just as important, by making his perfectly logical comments (in addition to others about how Snowden should be prosecuted) Toobin suddenly, and unfairly is taking on those with the loudest voices and theoretically the most to lose, his fellow journalists.

But it shouldn’t be that way. Journalists should be looking out not for themselves, but instead ensuring that the public at large understands the issues at hand. While they may not like Toobin’s comments and the ramifications of them, what did he say that was legally unsound?

Most Americans appear to support Snowden’s leaking the details of the NSA’s sweeping domestic spying programs to the press (though, opinions relating to the leaking of Western spying programs directed at foreign governments is more mixed.) However, it is forgivable based only on media coverage if you did not know that the majority of Americans also support prosecuting Snowden for his crimes.

According to a Pew Research poll from June, while 49 percent of the public believe Snowden’s NSA leaks served the public interest, 59 percent of those surveyed believe he should be held criminally liable for those actions.

Toobin employed no subtlety when he defended the actions of the British government, but this is the extent of his offenses. The sharply negative reaction his comments have received from the press is not warranted and reflects bias in the purest sense of the term. Toobin was applying his dispassionate legal mind to the question of whether Miranda should have been detained. The media’s response to Toobin’s analysis has been emotional, personal, unfair, and unenlightening.