In Honor of First Amendment: 5 Americans in Blatant Acts of Free Speech
video

In Honor of First Amendment: 5 Americans in Blatant Acts of Free Speech

Happy Independence Day! While you grill meats, listen to rock ‘n’ roll, and celebrate our nation’s independence from the bloody Brits, take some time to reflect upon the rights you likely take for granted. Among those wonderful rights protected by the United States Constitution and its amendments, perhaps the most controversial (debatable, yes) is the First Amendment, broadly known as the one protecting the freedoms of speech, religion, press, and association.

While it’s one of our most cherished parts of the Bill of Rights, it’s also one that has spawned intense debates over various acts that fall within its purview. Let’s look at five of those distinctly aggressive yet (thankfully) protected acts of speech. We’ll skip the most obvious one since it’s become so mundane you can easily web-search it and contribute to a $12 billion based largely out a particular Californian valley. Still don’t know what it is? Here, let me Google that for you.

There I said it. It wasn’t so hard now, but four decades ago, it got comedian George Carlin arrested after a gig in Milwaukee. You can say those words all you want in public now — you should be protected — but don’t you dare drop them on broadcast television.

Watch Carlin’s legendary routine (from years after he got arrested) below:

Love it or hate it, desecrating the American flag is a protected act of symbolic political speech. As of 1989, it is no longer a criminal offense to burn the flag. Senators may have attempted to revive the ban, but for now, it’s a protected act of defiance. Many other countries still have strict criminal punishment for flag desecrators.

Watch video below of an honorably-discharged Marine burning Old Glory with some anarchist friends. It may make you squirm, and it may make your blood boil, but be thankful our Constitution protects it. Amen:

There are plenty of examples of inflammatory speech we see every day — racism, sexism, Nazism, plain ol’ stupidity — but few have stirred as much controversy in the past decade as Pastor Terry Jones‘ unending desire to burn the Koran, the Muslim holy book, as an act of protest against another religion he finds detestable:

On a similar note of protected inflammatory speech, here are some folks (including Jones) burning an effigy of President Obama for what they deemed “National Burn Effigies of Obama Day.” Think for a second how in most other countries, throughout most of world history, this hateful act would undoubtedly land you in jail or worse:

In a 1993 Supreme Court decision overturning a local law against ritual animal slaughter, Justice Anthony Kennedy wrote: “[R]eligious beliefs need not be acceptable, logical, consistent or comprehensible to others in order to merit First Amendment protection.”

That SCOTUS case focused on a city in south Florida, which is densely populated with people who practice the West African/Caribbean religion of Santería. To this day, many residents still partake in the ritual slaughter of animals like goats and roosters, as protected by the Constitution:

It may be crude, it may be rude, it may reflect poorly upon Flynt. But it’s protected speech: 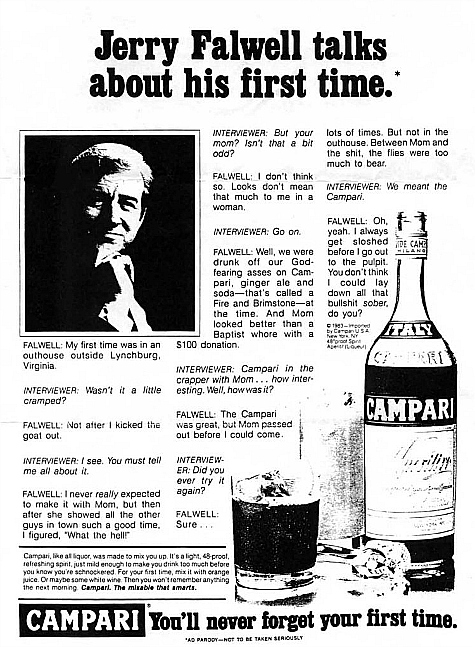 And while we’re on the subject of Larry Flynt, watch this stirring scene from his 1996 biopic film in which lawyer Alan Isaacman (played by Edward Norton) reminds jurors that we live in a free country and that sometimes means we have to tolerate things we don’t necessarily like: