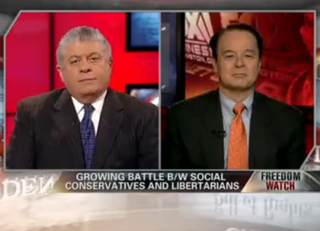 The American right may have won a significant victory in November, but it seems that at least once a year, during CPAC season, they suffer a tremendous public identity crisis, with civil libertarians going after the “family values” conservatives at a convention that often feels like more of a negotiation meeting than a union of like minds. To discuss these sentiments, Judge Andrew Napolitano has been debating members of all side of the right on priorities, and how important civil liberties are compared to the increasingly desperate national economic situation.

In many ways, the odd couple dynamic between civil libertarian types and family values traditionalists is the core plot device of Freedom Watch— the show did burst out of the gates with a Ron Paul–Sarah Palin showdown— and the dialogue is at its best when analyzing that tension. Given that CPAC tends to bring that tension to the forefront, Judge Napolitano has been speaking to people all across the right-wing spectrum, from Palin (who he bafflingly described as “a little more on the libertarian side,” before modifying that as a relative label to Mike Huckabee) to Huckabee. Bringing in executive vice president of the Cato Institute David Boez today, the pair sought to find which side provided the Republican Party a greater political edge. Boaz appeared to not see it as a contest at all.

Explaining that the issues bringing voters to the polls last November were “deficits, debts, and takeovers of companies,” he wondered how diverting attention from those would help Republicans at all, and he expressed concern that Republicans were shifting priorities. “It seems to be they’re down on Capitol Hill,” he explained, “talking about abortion, and [sic] they’re across town, conservatives are debating whether gay people are allowed to be in the same hotel. That looks to me like they’re diverting themselves from the focus they promised during the election.”

There was little dissent from the Judge, though the biggest issue for him, even more than the microeconomic issues, was the astronomical debt, and the fact that the Republican leadership, to him, didn’t appear to be doing enough to cut it. He even noted that Sen. Rand Paul‘s budget cut– by far the most extreme proposed in the Senate– fell far too short of being anything but a bandage over the debt.