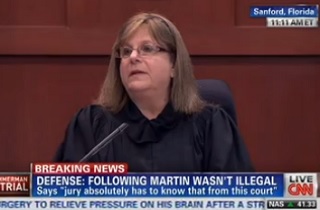 Judge Debra Nelson doesn’t much seem to like the George Zimmerman defense team, if a series of tense exchanges is to be believed. At a hearing on jury instructions Thursday morning, the judge’s patience with the defense wore thin once again, as attorney Don West continued to argue with Judge Nelson after she had already ruled on a defense motion. When the judge admonished West about continuing to argue after she’s ruled, West made an in limine motion to preclude the prosecution from making a particular argument, which Judge Nelson promptly denied.

“Ask the state to produce the statute that makes it illegal to follow somebody,” West demanded.

“You’re asking him to prove a negative, basically,” Judge Nelson replied, adding “My question is, show me a Florida statute that says this is the law in the state of Florida. What you’re asking me to put in here is not unlawful activity, under Florida law. You can argue that to the jury in the closing argument.”

After some more argument from West, Judge Nelson said “You’re repeating your argument. I’ve heard the argument from both sides, I am not giving that instruction.”

“We submit that’s an integral part of our theory of the defense, and it’s error by not instructing the law — this jury properly on the law,” West persisted.

“I understand. I’ve already ruled,” the judge said, impatiently. “You have — you continually disagree with this court every time I make a ruling. I have provided you, on three separate occasions, with the court’s professional conduct in the courtroom. Included in that is do not continue to argue with the court after we’ve ruled.”

“If I have made a mistake in this case, you will appeal,” she continued. “If there is a conviction, it will get appealed to a higher court, and they can review it to determine whether or not I made a mistake. This is my ruling on this issue. You are free to communicate that to the jury in your closing argument. I am not instructing them on that.”

“I’m not disagreeing,” West responded, changing his tactic. “I would like, though, to move in limine, at this time, with regard to Mr. de la Ronda or Mr. Guy or Mr. Mantei’s anticipated closing argument, to ask the court to order them not to suggest to the jury that following somebody on foot…”

Judge Nelson interrupted West. “Do you want me to get into getting a predetermined transcript of what each side intends to argue at closing argument, and go through it, and say what can and cannot be argued? You are free to argue that.”

“No, ma’am,” West replied. “just this. It would be an improper argument of the law if the state were allowed to suggest to this jury that it is unlawful for someone to follow another individual by car or on foot.”

“I’m not going to address that issue,” Judge Nelson replied.

“And the state being allowed to make that argument,” West continued, “would mislead the jury as to the law, and would allow the jury to make a decision based upon an improper legal premise, because the state can’t make that argument legally, and I’m moving in limine now for the court to preclude that specific argument, and I understand the court’s ruling as to the instruction.”

“Your motion in limine is denied,” the judge curtly responded.

The exchange follows a series of unfortunate events in which West has continued to object even after the judge has ruled, including two such exchanges Wednesday, when Judge Nelson directly addressed George Zimmerman regarding his decision whether or not to testify.

In a case like this, where serious lesser included offenses are to be considered, jury instructions are especially crucial, which is why this morning’s hearing has been so contentious.