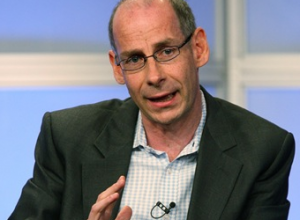 The move announced by ABC News president Ben Sherwood Friday, assigning James Goldston as new senior executive producer of the network’s Good Morning America was not hard to decode: ABC’s dead serious about knocking NBC’s TODAY off its perch as network TV’s top morning show. “I think GMA is in a strong position,” Goldston told Mediaite after the announcement. “The show is ready to roar.”

Goldston knows a bit about coaxing roars out of programs others have given up on. He’s credited with leading the rebirth of ABC’s Nightline, which had been widely seen as bound for cancellation when Goldstein and his second-in-command Jeanmarie Condon (who now assumes control of the show) began a slow, steady and ultimately hugely successful re-creation of Nightline with a multi-anchor format and a focus on pure, powerful storytelling. “Everyone said Nightline couldn’t win, couldn’t even survive. And that’s not true,” said Goldston. “You can move the dial. You have to be very patient. It takes hard work.”

The hard work at Nightline paid off. A brand that had been identified with Ted Koppel and the 70s and 80s found a new, fiercely dedicated core of viewers, who’ve recently launched the show to ratings success in late night, at the expense of David Letterman and Jay Leno. Nightline was helped by NBC’s chaotic decision to move Leno to primetime–and then back, and, Goldston believes, by doing something timeless: giving viewers content that’s actually interesting and important. “I think it’s true. More true than ever. People have limited time, they want to see things that are meaningful to them and are worth their time.”

Goldston’s mission now is to take his experience in late night and bring it to the hypercompetitive world in the morning, where GMA has trailed TODAY for years. Goldston says viewers won’t notice a change when he begins work Monday. They may soon see GMA’s hosts doing a lot more social media, a tool that the revamped Nightline uses effectively. “We look at the changes in the media landscape and the tools available to us and we’re not scaread by that,” Condon told Mediaite. “We embrace that and we’re excited by that. That’s vital.”

“Classic great storytelling with a modern twist,” Goldston said, noting that Nightline‘s decision to embrace social media energized its reporting, and its connection to viewers. “We have millions of people we can reach out to on social media. If you can tell them, Christiane’s got an interview with Mubarak, they watch. They respond to that.”

“Clearly this is an exciting moment for me,” said Goldston, who told us making the shift from late night to early morning in a weekend won’t be that difficult. “I don’t get much sleep anyway.”