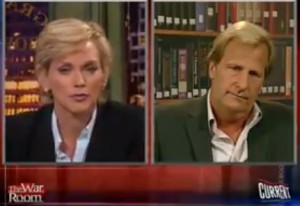 Jeff Daniels, star of the much-buzzed-about HBO cable news drama The Newsroom, continued the show’s steady stream of denials that his Will McAvoy character is in any way based on former Current TV host and current former TV host Keith Olbermann, but with a twist. This time, Daniels was in Olbermann’s old house (the one that couldn’t contain his fancy chandelier self), Current TV, as The War Room‘s Jennifer Granholm put Daniels on the spot.

Host and former Michigan Gov. Jennifer Granholm told Daniels, “There’s been a lot of reports about who was the model for your character when you were preparing for the role,” then asked, “From your mouth, who did you look at?”

“Nobody.” Daniels replied. “Nobody. Nobody came to me and said, by the way, Keith Olbermann, take a look at him. Nobody did that. Aaron never mentioned it and I was happy because it was so well researched–Aaron had spent time at several cable news networks–just getting the environment, the whole news day, going on the air–all that stuff. He took a lot of notes and over a long period of time so when we walk on that set at ACN, our fictional newsroom, you swear you could put a satellite on the roof and broadcast. It’s so authentic. That said, it really is fictional.”

While Sorkin has, apparently, done other extensive research for the show, he did spend a considerable amount of time on the set of the MSNBC version of Keith Olbermann’s Countdown, and whether Daniels is basing his portrayal on the former anchor or not, the character, as written, shares an awful lot of similarities with Olbermann. Aside from the obvious traits (Olbermann’s critics delightedly assign McAvoy’s difficult temperament and disgruntled staff to him), there’s a moment in one of The Newsroom’s trailers in which McAvoy whips his Blackberry at the camera. That sounds eerily familiar, doesn’t it?

Detractors aside, McAvoy also mirrors Olbermann in ways that are arguably positive. In his Countdown prime, even his harshest critics would have to concede that he always seemed to be guided by a deep, idealistic concern for journalism, and in many ways, accomplished the mission that Daniels’ character has set himself upon. For better or worse (depending on your point of view), Keith Olbermann changed the entire cable news landscape, such that it’s difficult to imagine a show like The Newsroom existing if not for him.

Gov. Granholm also asked Daniels his feelings about news anchors sharing their opinions, and Daniels’ response revealed even more of Olbermann’s apparent influence. “Sam Waterston says it at the end of the pilot, which aired on Sunday.” Daniels replied. “He says, ‘you wouldn’t be the first anchor person to have an opinion.’ Cronkite did, and arguably, it ended the Vietnam war. Murrow did and it ended McCarthyism. You can take a stand and you can reach, aspire to be one of those guys.”

That Sam Waterston speech from The Newsroom could have been lifted from a dozen Keith Olbermann interviews and Countdown scripts. It was his main response to critics who questioned his credibility.

Daniels’ and Sorkin’s reticence to deny Keith Olbermann as an influence is odd, as if they think he’ll clean them out with a lawsuit. Not to worry, though. Even though it may seem this way sometimes, Keith Olbermann doesn’t own a patent on being a talented, narcissistic prick.

Here’s the clip, from Current TV’s The War Room: