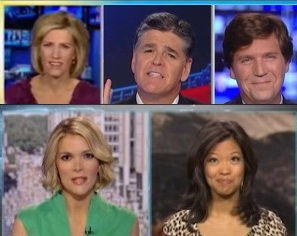 Conservatives in general, and Fox News in particular, have gone to town on Politico like a rumpspringa tour bus over their “Is Rick Perry Dumb?” headline from yesterday. However, after watching three separate Fox News segments on the article, featuring guests Tucker Carlson, Michelle Malkin, and Laura Ingraham, I’ve noticed that while Fox guests are certain Politico is biased, and/or really, really wish people would call President Obama dumb, too, none of them offers even a syllable in defense of Perry’s intellect.

The closest that anyone came to such a defense was Sean Hannity‘s declaration (never revisited or supported) that Politico’s headline was part of a “slanderous trifecta.”

The balance of the Hannity segment is spent obsessing over a handful of President Obama’s gaffes (one of which I hadn’t seen before, and was actually pretty funny, in which he says he sees many of our fallen heroes in the audience).

Similarly, Megyn Kelly‘s interview with Michelle Malkin on the subject is all about media double standards, and whether intelligence (in terms of formal education, at least) makes any difference. Again, the focus is on the media not also calling Obama dumb, although Malkin does flirt with a defense, of sorts. “The question is not whether Rick Perry is dumb,” she says, but follows with the decidedly non-intellectual observation that “the guy’s got plenty of political savvy to have gotten elected for as many years as he did.”

Kelly even follows up by asking, “Does it matter, should it matter if somebody’s dumb?”

On this morning’s Fox and Friends, conservative radio host Laura Ingraham didn’t even bother to attack Politico over the headline, and only slapped on a weak zinger at President Obama as an afterthought. She even appears to agree with some of what’s in the piece, saying of Perry’s performance on her own radio show, “I think he’s in the process of forming his approach to China. I think he has to get a better answer than he had on my show.”

In all three segments, hosts and guests virtually ignore an important fact: the attacks on Rick Perry’s intellect are coming from Republicans, not Democrats. In fact, former Obama spokesman Bill Burton sent out a lengthy statement about Perry on Friday that contained nary a mention of Perry’s intellect. Burton does point out how many Republican voters share Perry’s stated views on climate change and evolution, an attack initiated by Republican Jon Huntsman, but only to note the political advantage of that agreement.

The truth is, you could ask a hundred liberals and Democrats what their biggest problem with Perry is, and I doubt his intellect would crack the top ten. I certainly don’t think Perry is stupid. Does he pander to dummies? Sure, but I don’t believe for a second that he actually has doubts about evolution, which any thinking person will tell you does not disprove the existence of God, and I’m sure he knows that creationism isn’t science any more than math is a religion. He’s saying what he has to say to get votes.

The problem is that Perry’s Republican opponents are attacking him in an area that’s dicey for conservatives to defend. Any defense of Perry’s intellect, in the conventional sense, would necessarily mean undercutting the “elitist brainiacs are bad” narrative that they’ve been selling for decades, and the rewards for such a defense would be thin. Can anyone remember the last president, before Barack Obama, who was strongly identified by his keen intellect? For many voters, an average intellect is a feature, not a bug.