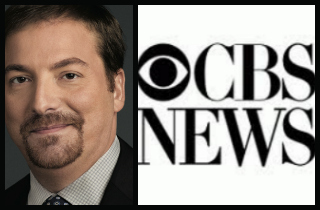 If the Boston bombings taught us anything about the state of media in 2013, it’s that some reporters—like quarterbacks—have trouble dealing with pressure.

Playing the role of blitzing linebacker on said quarterbacks/reporters is Twitter. It’s that social media juggernaut that gets fresh information on news stories so quickly, its wreaking havoc in the backfield of every newsroom across the country. Exhibit A was on display shortly after the Boston bombings, where journalists–knowing this was the kind of huge event that rivaled almost anything since 9/11—really, really wanted to stand above the rest of the crowd. And in the process, didn’t follow the simple rule of measuring twice and cutting once when it comes to making decisions around moving ahead with a story.

Consequently, two days after the bombings and with suspects still on the loose, four major media entities (AP, Boston Globe, CNN and Fox News) all got the name of one potential suspect wrong. Predictably, all took a beating on (of course) Twitter for the error, as well as on cable news shows, The Daily Show and online publications like Mediaite.

A few days later after the real perpetrators (the Tsarnaev brothers) were killed and captured, respectively; the usual reflection on what went wrong for the media began in earnest. The message–following some deep reflection–was a collective: “We may have rushed to be first, but moving forward…we’re going to make accuracy a priority over speed.” 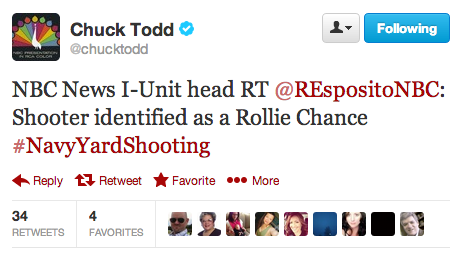 Of course, talking the talk is one thing. Walking the walk is entirely another. So it’s no surprise that today—following the shooting at a Washington Naval Yard that has left 12 dead and more injured—that CBS and NBC took their turn in reporting the name of the wrong suspect in an effort to beat the clock. But what makes today’s gaffe by NBC’s Chuck Todd particularly glaring was his curious put-the-toothpaste-back-in-the-tube moment of posting a Tweet that revealed the (wrong) suspect’s name (Rollie Chance, a Navy Lieutenant), only to erase the tweet after the report was confirmed false. Screen grabs make this a Weiner-like, pointless exercise: Deleting the tweet doesn’t make it just go away as if it never existed, doesn’t make him look any more credible.

The result? CBS gets hit for getting the shooter wrong, but only as a general news entity. But Todd—especially to the delight of conservatives in the media who believe he carries water for the Obama Administration—gets the barrel of the bat by actually putting a face with the erroneous story. And by the way…just wondering aloud: Todd is a political correspondant for NBC/MSNBC and hosts a show on the latter. Having said that, shouldn’t breaking this kind of news be left to the pros at the network like Pete Williams, who usually gets these kind of stories right?

Anyway, instead of letting the false story die from there, Todd felt it was his obligation to share exactly what went wrong. According to him, an I.D. found next to the body of the dead gunman logically led to the Rollie Chance report.

How Todd and NBC made the jump in the fog of confusion during a mass shooting like this in automatically assuming that the I.D. belonged to the gunman is speculation at its worst (people tend to drop things while getting shot at). And for Todd to try to explain it away in a “you would have made the same mistake if put in our position” manner in painstaking tweet after tweet after the fact (instead of, you know, going on camera where he belongs) only made a wrong become a whole bowl of wrong.

Which then makes you wonder: If Todd didn’t have access to a Twitter account, would the story have been better vetted? Would someone have jumped in before Todd went on air to report the story and said, “Wait a minute? Is this all we got? Are we sure we want to run with this before verifying?”

Caution is thrown to the wind.