In Wide-Ranging Interview, Boehner Defends Remark That Obama ‘Doesn’t Give A Damn’ About Middle Class 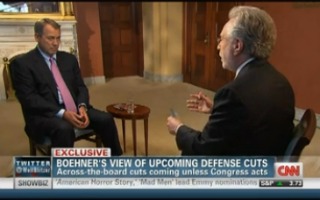 In a wide-ranging interview with CNN’s Wolf Blitzer, House Speaker John Boehner clarified his comment that voters will “probably not fall in love” with Mitt Romney. Boehner said his remark was really about the President’s failed economic policies, adding that he thinks there will indeed be enthusiasm for Romney come November.

“Any incumbent present running for re-election, the election is going to be a referendum on the job that they’ve done,” he said.

After protesting that he doesn’t speak with Romney “often,” Boehner shared that Romney has not consulted with him regarding his potential VP picks, nor does he “need” to.

As for the discussion surrounding the release of Romney’s tax returns, Boehner felt it was all a “sideshow.” “This is nothing more than a way to try and distract people from the President’s failed economic policies,” he said.

Blitzer then asked Boehner to explain what he’d meant when he said that the President “doesn’t give a damn” about middle class Americans. “If he did,” Boehner asked the anchor, “why wouldn’t he meet with his own jobs council? Why wouldn’t he spend some time over the last nine months talking to the leaders here in Congress about what we can do together to help get our economy growing again?” The President, he continued, “checked out last Labor Day,” and has been primarily focused on his campaign since. “It’s all about him,” he said.

He insisted that he and the President have a good relationship, despite not always agreeing on issues — issues like, say, how the top two percent of American incomes should be taxed.

Blizter also asked Boehner about accusations Michele Bachmann recently made regarding longtime Hillary Clinton aide Huma Abedin. While Boehner, unlike Blitzer, said he didn’t know Abedin personally, everything he knows of her points to a “sterling character,” adding that he is not sure “what the basis of these claims may be,” but that “it’s dangerous stuff to be throwing around without a lot of fact.”

On the issue of Syria, Boehner said he does not believe the U.S. lending any sort of military aid is the right route to take at this juncture, essentially agreeing with the Obama administration’s take on the matter. He added that he feels direct military action at this point would be “over-involvement,” and is confident that “Assad’s days are numbered.”

When it came to spending cuts, Boehner said that a sequester is in place despite the President’s to the contrary because Obama “could not be inconvenienced by having a second debt limit vote before his re-election.”

When Blitzer noted that Boehner has a second anniversary as Speaker coming up in November and commented on his remarkable personal story, Boehner responded with the following: