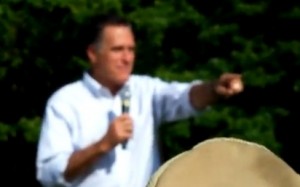 Monday night, we posted a short item about MSNBC’s reporting of Mitt Romney‘s amazed reaction to the sandwich computers at Wawa convenience stores, which he called “Wawa’s.”

Right-wingers went nuts, claiming MSNBC had “deceptively edited” the package, and mainstream journalists like Politico‘s Dylan Byers, Buzzfeed‘s Andrew Kaczynski (whose site initially reported it the same way Andrea Mitchell did, even though they posted both clips), and Current’s David Shuster piled on. None of them, however, seems to have noticed that Romney’s full story was a bald-faced lie.

With all due respect to my friend David Shuster, who demanded an apology from MSNBC, there was nothing wrong with their edits. The clip was intended to convey two things: that Romney kept calling the convenience store chain by the wrong name, and that he was “amazed” by the sandwich-ordering touchscreen. Those things are both true, and the edits were self-evident. They were no more “deceptive” than those packages of John McCain saying “Joe the Plumber” 63 times during a debate. Anyone who can look at a TV without exclaiming “‘Tis sorcery!” understands this.

The longer clip (which we linked to) runs over 3 minutes, versus MSNBC’s 30 seconds or so, and includes the context that Romney was contrasting the federal government with the private sector, a contrast that depends on his amazement with Wawa’s sandwich computer. In a perfect example of how effective “working the ref” can be, mainstreamers like Buzzfeed have swallowed the ridiculous right-wing spin that Romney was amazed by the contrast he was drawing, and not the sandwich computer, which doesn’t make any sense at all. That’s like saying you’re not dying in a pool of molten lava, you’re dying from the contrast between the lava and normal ground.

But the mainstream media are so accustomed to being worked over by right-wing cries of “bias” that they leapt to condemn MSNBC’s completely reasonable editing of the clip, even as they ignored the glaring lie Romney told in the longer clip. As it turns out, MSNBC did him a favor by omitting his stupid comparison, but they won’t get much thanks for it. Here’s the longer clip, which we linked to yesterday at Buzzfeed: Listen carefully to Romney’s anecdote about the optometrist and the 33-page change of address form:

He only missed it by 31 pages. That’s right, the form that’s so very inferior to the sandwich computers at “Wawa’s” is two pages long, four if you include the instructions. That optometrist is either delusional, or a delusion of Romney’s. Either way, it’s inexcusable for journalists to let this go, even as they come down on MSNBC for completely permissible, completely transparent editing.

Let’s see if those same journalists are this aggressive with Mitt Romney about his bald-faced lie. In fact, let’s see if the lapdog right-wingers who leapt to his defense have the self-respect to care that he lied to them. I’m betting no. I’m also betting that “working the ref” will end up working, and MSNBC will issue some kind of clarification. Here’s hoping they stick to their guns. “Out of context” has to mean more than the mere act of pulling a quote from a longer section of speech.

Those journalists should also question Romney’s premise that federal record-keeping should be as easy to alter as a Wawa Gobbler. The worst thing that you can do with a Wawa sandwich computer is order a sandwich, then walk out, leaving the hoagie to be thrown out or eaten by an employee. Medicaid provider records can be manipulated to defraud millions of dollars from taxpayers. Given that fact, I’d say two pages is pretty reasonable.

Update: The geniuses at Breitbart.com raise the possibility that Romney isn’t a liar, but just stupid and still wrong. In his remarks, he said the optometrist was trying to change his address with the federal government so he could get paid for services to “the poor and seniors,” which would be Medicaid. Medicare is not a program for the poor, and they don’t have a change of address form.

Providers who can’t work out their online system must fill out an entire new enrollment packet, which is 25 pages. That’s because it’s a contract, and much of that 25 pages is devoted to warnings against defrauding taxpayers and the like.

But surely, the Breitbart.commers aren’t suggesting that Mitt Romney doesn’t know the difference between Medicare and Medicaid? When you’re this deep in a hole, stop digging.