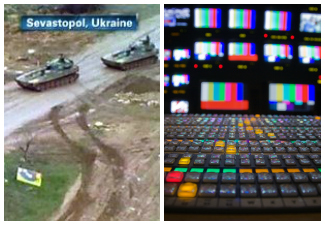 The bubble is a term that has been used on a few occasions in this space. In this context, it is defined as a world where folks in TV news live in, a world where 10-18 hours a day is consumed by what is going on in the world, what the hot stories are, and how to best present these stories to an audience.

Said bubble isn’t just relegated to those gainfully employed in the industry, but hard-core news junkies as well. According to Nielsen, a “medium” viewer will watch cable news for an average of 3.2 minutes. These people obviously don’t qualify for bubble consideration. Instead, that’s left to what Nielsen calls “heavy” news watchers, who absorb a whopping 72.3 minutes per day.

Quite a precipitous gap between medium and heavy viewers, right? If I’m running a cable network, one of my top priorities is finding a way to up that medium-watcher time. And the only way to accomplish this is to figure out why they’re tuning in and out so quickly…yet keep coming back only to repeat the same exercise.

Of course, some of this behavior has to do with A.D.D. and itchy remote trigger thumbs. But thanks to being fortunate enough to work as a media critic (in a writing capacity), and to have served in a newsroom behind the camera (as a former news writer/producer), and to be on camera (in the pundit/guest capacity some of you see me doing now on CNN and Fox), I can state from experience that most producers and especially anchors/commentators really do live in the bubble. In the process, the only viewers being catered to are the heavies, not the mediums, and that’s no way to broaden an audience.

So how does a program expand its viewership beyond loyal junkies? Well, a good start would be to explain complicated stories better. Of course, that process begins when a producer or anchor has the ability to step out of its all-news-all-the-time mindset and realize most viewers at home aren’t nearly as educated on the details of a story as they are.

Let’s use Russia/Ukraine/Crimea story as an example. When I’m out to dinner and/or drinks, I like to subtly test my friends (those who don’t work in media, but serve in the financial sector, education or law enforcement) on a particular news event. It’s a good way to gauge depth of knowledge on a big topic. For the situation in Ukraine, all eight friends had heard about it. The basic premise was understood (Russia invading a sovereign country without provocation). But in terms of why Russia had invaded or what they gain by doing so (and what we may lose), that’s where things got fuzzy.

And Crimea? Well, that’s a whole other ball of wax: Is it an independent country? Wasn’t the Russian Navy already using Crimea ports before the invasion? You can feel eyes glazing over at the table. Why? Because no one could really articulate why this mattered to them, their finances, their kids, their daily lives.

As a producer, anchor or commentator, this is when an education for the viewer’s benefit is required. But with time at such a premium in cable news, how can that be accomplished without upsetting a breaking news tempo (and upsetting the heavy viewers in the process)?

Well, remember the old VH1 pop-up videos? The kind of videos that used to offer pop-up bubbles to viewers with interesting info nuggets on the band/artist and the story behind the song being played? Well…those could be deployed in cable news as well, albeit in the much more subtle, official way (and without the bubble sound effect).

The good news is that cable news already has a version of pop-up bubbles at their disposal, most commonly referred to as fact panels and/or bio bullets, which generally occupy the right third portion of a screen. But these panels are vastly underutilized. In the case of Ukraine, they most definitely would help fill in the blanks in terms of the “Why this is important to you” category.

Granted, these panels don’t necessarily need to be used during the reporting aspect of the story. They eat up real estate and could diminish riveting pictures or video coming from reports on the ground. Where they can and should be used, however, is during the analysis/interview portions of a newscast, which are seemingly increasing by the day. According to a separate Pew Research analysis, coverage of live events and live reports dropped in daytime programming by one-third—from 33% of the news in 2007 to 23% in 2012. And the airtime devoted to interviews rose from 39% to 51%. Big jump, but with the (cheaper) move to more opinion-based programming, it’s not surprising.

So with more than half of a newscast now dedicated to Q&A and/or debate panels, what better time to offer up info nuggets on everything about, say…Putin, Russian pipelines running through the Ukraine to supply large amounts of energy to Europe, who’s in charge in Ukraine (Answer: Alexander Turchynov — the speaker of the parliament and staunch ally of formerly-jailed opposition leader Yulia Tymoshenko), why Crimea’s ports are so important to Russia, etc. It could even apply to basic nuggets on when/how Putin came to power, how the EU and NATO are responding, or how the Dow and Nasdaq are performing since the crisis began.

And another reason why these panels should be incorporated more? The size of TV screens and increased presence of HDTV. According to Leichtman Research Group, over 75 percent of American homes now have HDTVs, and more than half own more than one. Per a Sharp Electronics study, the average screen size for HDTVs was 38 inches in 2012. With prices on big screens continuing to fall, that size will jump to 60 inches by 2015. More screen real estate means a better ability to share more information…

So now we’re at the “Now what?” stage of the Ukraine story. Russian troops don’t appear to be going anywhere, no shots are being fired. The West is trying to figure out next steps while Putin is doing the same. Without conflict or even a war of words, will viewers stick around to watch the intermission? If the last ratings report is any indication, outside of CNN—which is seeing a decent bump—viewers aren’t exactly finding events there all that riveting (Fox and MSNBC’s Monday numbers are about the same as before events in Ukraine began). With military action by the U.S. or Europe wisely not being seriously considered, will this story just linger for a bit longer before the media and world turns its attention to something else? At this point, there are more fireworks between Darrell Issa and Elijah Cummings at the IRS Hearings, which is getting some nice air time on all the cable networks today.

Some news stories are complicated. Some may seem more important to those covering them than to those watching at home.

Those who live in the bubble sometimes forget that…

Or never realize it in the first place.

Producers need to understand it’s more about images and soundbites.

But about education and perspective as well.

Providing bubbles to those outside the bubble can help do that.