Ingraham To Liberals On Benghazi ‘Politicization’: ‘You Guys Are Masters at This. It’s Fox News’ Fault’
VIDEO

Ingraham To Liberals On Benghazi ‘Politicization’: ‘You Guys Are Masters at This. It’s Fox News’ Fault’ 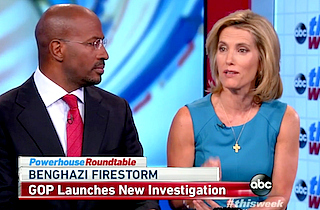 New ABC News contibutor Laura Ingraham battled Senior White House Advisor David Plouffe and Crossfire co-host Van Jones on This Week with George Stephanopoulos over the “politicization” of Benghazi, arguing that had the same concern over talking points occurred under George W. Bush, the left would be crying “conspiracy.”

“We have four dead Americans,” Ingraham said. “A U.S. ambassador’s body was dragged through the streets. Okay? It was beyond heartbreaking and infuriating. No one in custody. Have an arrest warrant out. No one in custody. And in the immediate aftermath, the response was to go political. I would say David or Van, if this were George Bush, [if he] would have done anything like this, you would be going nuts on it. You would be going ballistic.”

“That’s not fair,” Jones said. “First of all, there were thirteen embassy attacks under George W. Bush. Eighty-eight people died. Eleven Americans died under George W. Bush in embassy attacks. We did not politicize it. I knew Ambassador Stevens. This is a disservice to him. This is a disservice to him for you to take national tragedy and use it as a political opportunity.”

“The only difference here is that the Bush administration did not put out a false narrative as situations,” added Rick Santorum. “[The Obama administration] put out a narrative that was not supported by the evidence…George Bush did not try to move the ball, to deflect it.”

That led the panel to re-litigate when and how completely the Obama administration called the incident a terrorist attack as opposed to a spontaneous eruption of violence in response to protests over a video.

“Are you still trying to sell it as a protest?” Ingraham asked Plouffe and company. “I can’t even believe you’re saying this.”

“This was happening in real-time,” Plouffe said. “As soon as information was identified, it was released. That’s why over the course of those weeks we knew exactly what happened. There was no politicalization. [Obama] in the Rose Garden talked about it as a terrorist attack. What is happening here, and it’s stoked by the talk radio personalities and Fox News, is an alternative reality.”