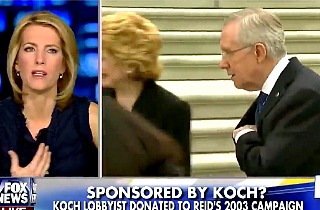 “This is the typical problem the Democrats run into,” Ingraham said. “They start demonizing individual citizens from the well of the Senate — which I haven’t seen before, a sitting Senator take after two men who have done an enormous amount for the free market. They are merely expressing their views in the political system. This is what George Soros does. This is what Steven Spielberg does. This is what David Geffen does. They all spend an enormous amount of money in politics. They’re not demonized. But these two individuals in the well of the Senate by a man who has his own connections to the subsidiary of the Koch Brothers!”

“Harry Reid should be called out on this by every Republican and everyone of good conscience in the U.S. Senate,” Ingraham continued. “I find what he’s doing on this to be frankly dangerous. It’s disturbing. But it’s typical Harry. He doesn’t have a record to talk about. So he demeans and tries to divide by going after two men who have not violated laws, who are businessmen trying to actually create opportunity for people in this country. I find it disgusting.”