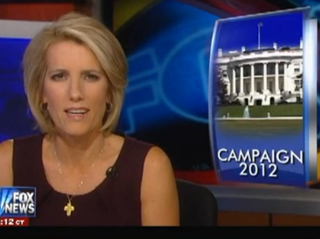 Add Laura Ingraham to the list of conservatives highly upset with the way the Romney campaign handled the Supreme Court’s decision on health care reform last month. Opening The O’Reilly Factor last night, Ingraham accused the campaign of “squandering a big, fat gift” and losing momentum completely by getting in the weeds about whether the individual mandate was a tax.

The Romney campaign, Ingraham argued, “lost the momentum created by the Obamacare decision” and let the narrative turn into “GOP confusion and dissent,” with conservatives offering their own “blistering critiques of Romney’s campaign.” Then Romney goes on vacation, ingraham explains, and gives the media “the kind of optics that don’t do him any favors” while President Obama talks about his vacations on a Greyhound bus as a kid. Ingraham asked guest Chris Begala what the impact of these mistakes would be.

“Those are maybe not the best images to send out, but it is the first week of July,” he argued, too early to be worried about vacation images. Ingraham looked at worrying poll numbers for the Romney campaign– the ones in Pennsylvania, she argued, were “nothing shore of disturbing.” “There seems to be a disconnect between the reality we’re seeing right now and the intensity of the campaign,” she argued.

Begala explained this might be because the Romney campaign cannot afford to attack, because the candidate’s favorability ratings are so low. “Your unfavorables go up when you attack,” he explained, so they are leaving the attacking to the PACs. He suggested the campaign “be more aggressive about jobs and tell his story, a bio– a lot of people don’t know this guy yet.”