‘Innocence Of Muslims’ Filmmaker Speaks To Fox From Prison: ‘If I Could Go Back,’ I’d Release Video Again
VIDEO

‘Innocence Of Muslims’ Filmmaker Speaks To Fox From Prison: ‘If I Could Go Back,’ I’d Release Video Again 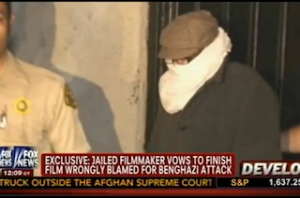 Nakoula Basseley Nakoula, the man behind the highly controversial video “Innocence of Muslims,” remains in a southern California prison nearly nine months after he was arrested for allegedly violating terms of his probation. Nakoula spoke to Fox News from prison this week and portions of the phone interview aired during America Live with Megyn Kelly today.

The filmmaker defended himself and the movie he still intends to complete when he is released from prison. “It is not [a] religion movie,” Nakoula said. “I have a lot of Muslim friends and not all the Muslims believe in the terrorism culture. Some of them believe in this culture. That’s why we need to fight [against] the culture, not the Muslims. My enemy is the terrorism culture; this is my enemy.”

When a 14-minute trailer for “Innocence of Muslims” was posted on YouTube last year, it set off protests in Egypt and was originally believed to be the catalyst for the attacks on the U.S. consulate in Benghazi. Nakoula’s right to freedom of expression has become a cause célèbre for some conservatives who believe he and his film were used by the Obama administration as a “scapegoat” to avoid labeling the Benghazi assault a “terrorist attack.”

“Of course I’m proud of it,” Nakoula told Fox of his film, expressing no regrets. “If I could go back, I would do it again.” He had “no comment” on the question of whether he believed his film was used as a scapegoat and refused to criticize President Obama. “Who am I to criticize the commander in chief?” Nakoula said. “He knows more than me.” He added, “I would like to thank the United States government from the top to the bottom for protecting me,” perhaps from Muslims who could have targeted him with violence due to his film. “They treat me very, very good since this happened until now.”

Nakoula is set to be released from prison in September when he says he plans to complete and release “Innocence of Muslims.”