Inside Up With Chris Hayes: The Best (And Worst) Part Of Waking Up Weekends 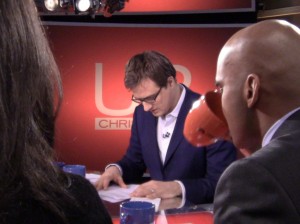 It’s fast becoming the worst-kept secret in cable news that Chris Hayes is ruining people’s weekends. The editor-at-large of The Nation, former Rachel Maddow fill-in, and (for the past few weeks) proud papa of daughter Ryan hosts a political roundtable which, true to its title, forces a growing number of people to get Up With Chris Hayes. The show combines the fun, accessibility, and sleep-interrupting qualities of a Saturday morning cartoon with the smarts and savvy of a crackling wonk dinner party. To atone for waking us up every weekend, Chris Hayes agreed to give us a look inside Up.

RELATED: MSNBC’s Up With Chris Hayes: A DVR Gem In The Making

As our own Frances Martel noted, upon the show’s mid-September debut, Up is “a DVR gem in the making” by virtue of its less-than-convenient airtimes (7am-9am on Saturdays, 8am-10am on Sundays), but for its fast-growing Twitter fans (self-dubbed “Uppers“), watching live is the only way to experience the show. While Up‘s ratings have been impressive (Up with Chris Hayes on Sunday (8a-10a) ranked No. 2 for the month with A25-54 (154,000 vs. 152,000), topping CNN Sunday Morning/State of the Union, Up is up 25% among A25-54 and 45% in total viewers compared to MSNBC in Nov. 2010), the response on the social media site is probably the best gauge, and driver, of Up‘s success. For the past several weeks, #Uppers has been a top trending Twitter hashtag nationally during the show’s broadcast. (More on those #Uppers to come, in a separate post.)

MSNBC President Phil Griffin is obviously among those dedicated fans. “I couldn’t be happier. It’s established itself far more quickly than I thought it would,” Griffin told me. “Chris has a really great sense of the show, of himself, of what he wants to do on that show, and it has succeeded right away.”

“What I hate about it is it’s another program I’ve got to watch,” Griffin continued, “but it’s such a smart show, a thoughtful show. It pulls together people from entirely different backgrounds, a different set of faces to the show…It goes beyond right and left, and really tries to get to the root of an issue in ways that I’m really impressed with.”

This isn’t just PR happy-talk from Griffin, either. He’s such a fan of the show that on a Friday night, rather than email me a canned quote about how happy he is with the show, Phil Griffin made a point of calling me, and gushed about the show for a good twenty minutes.

“Phil has been extremely supportive,” Hayes told me on Sunday, praising the amount of latitude Griffin has given him. “He has not micro-managed the show. He has given us feedback along the way, some of which I was skeptical of, and turned out to be right.”

For example, Hayes says that one early idea involved the use of pre-produced packages, an idea that Griffin didn’t like. “Phil didn’t say ‘Do not do that,’ he just said, ‘See how it works, I think spontaneity is going to be a key feature of the show,’ and I think he’s right. If we dumped out of a conversation to go to a 4-minute piece on tape, it would stall the momentum of the show.”

NEXT: Diverse Guests A Key To Show’s Success