Inspirational Paul Ryan Quote Of the Day: ‘We Will Speak With Clarity For Freedom’
video

Inspirational Paul Ryan Quote Of the Day: ‘We Will Speak With Clarity For Freedom’ 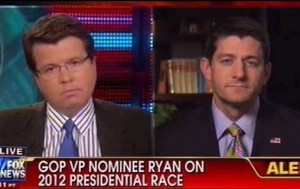 Reporters get about a brazillion (ask George W. Bush) emails a day from presidential campaigns, and they usually have yawn-inducing talking points as subject lines, but occasionally, there’ll be one that pimps a quote that the campaign is particularly proud of. One such email, from the Romney campaign last night, stood out to me. Promoting an appearance by Mitt Romney‘s running mate on Your World with Neil Cavuto, the stirring subject line read “PAUL RYAN: WE WILL SPEAK WITH CLARITY FOR FREEDOM.”

The segment this email was pegged to has a bunch of problems that I’ll get to in a minute, but something about that subject line, about the fact that the campaign was like “Now, this is a gem,” just got to me. Conservatives, I need you to be honest with me for a second, just one second. As a show of good faith, I’ll be honest with you, and confess a few things that we’re not supposed to say out loud. Keep in mind that I am a liberal, but I’m only one liberal, so I don’t speak for all of them.

First of all, and maybe it’s because I’ve been covering him for so long, but it really annoys me when President Obama uses that raspy stage whisper to convey emphasis and sincerity, which may very well be sincere, but just sounds like a guy breaking up with his girlfriend on a soap opera with a wonky boom mic. I’ve heard the President being sincere, and it doesn’t sound like that.

I don’t think President Clinton should have been impeached, and we all love him now, but let’s all get real for a second: of course it was about the sex, and of course, the sex mattered. Conservatives were wrong, but liberals shouldn’t pretend that getting blown in the Oval Office by a girl young enough to be your granddaughter, over whom you have pretty much the ultimate employer-employee authority, wasn’t creepy, and didn’t diminish the office of the presidency.

Finally, almost everything Ann Romney says is annoying. I know, I’ve gotten on Lawrence O’Donnell’s case for attacking the prospective First Lady, but this isn’t really an attack, it’s affectionate advice. She’s a nice lady, well-spoken, with terrifying taste in t-shirts, but otherwise, well dressed, and she obviously loves her family. To say that she’s never worked a day in her life is not an attack, it’s a statement of fact, as validated by her own husband, but it is an admirable thing to raise five children.

What’s not admirable is to complain about how hard it was, when many women raise five children while working a full-time job, and when they get cancer, and their low-wage jobs don’t pay them enough to afford health insurance (contrary to what Mitt Romney seems to think, the Emergency Room isn’t some free candy store for sick poor people; they will not treat you for cancer, even if you get there before it has spread through your whole body), they die. You think running for president is hard? Try telling your kids that mommy has to die because people wearing tea bags made Mitt Romney repeal her health insurance.

None of this is Ann Romney’s fault (nor is it her fault that the media acted like she was the second coming of Eva Perón because she didn’t throw up on herself while recounting her first date with Mitt for 20 minutes at the RNC), she doesn’t know any better. It’s still annoying.

There, now that I’ve leveled with you, conservatives, please be honest: doesn’t it drive you up a wall when Romney and Ryan say stupid things like “We will speak with clarity for freedom?”

Never mind the fraudulent context (President Obama went on for five paragraphs about how the rest of the world can like or lump the First Amendment in his UN speech), what’s the point of pulling that quote? It’s like that famous Chris Rock boast, “I take care of my kids!” Great, you’re not going to mumble about freedom, where do I sign? Does this kind of garbage not insult your intelligence?

Maybe it doesn’t, if you feel that the right to die if you lose your job and can’t afford to COBRA your health insurance is a cherished American liberty, but surely some of you have also noticed the stupidity of Ryan bitching to Neil Cavuto about speaking with clarity for freedom seconds after complaining about our flag being burned, which is protected by the First Amendment, or the echoing hollowness of the Romney/Ryan foreign policy argument, which seems to be entirely about talking more shit, but doing everything Barack Obama is doing.

It’s time you people started demanding plans from Romney and Ryan that consist of more than a bunch of synonyms for “good” and “strong,” and maybe have a few actual verbs in them.