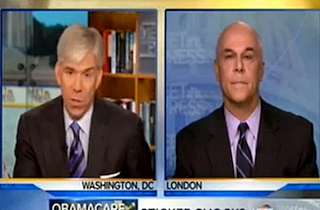 Florida Blue CEO Patrick Geraghty appeared on Meet the Press Sunday morning and defended Obamacare, telling host David Gregory that the 300,000 figure—the number of people being dropped from the insurance rolls, a number being used as evidence that President Barack Obama was not correct when he said people would get to keep their insurance—was not an accurate representation of the Affordable Care Act’s effects.

“We’re not cutting people,” Geraghty said. “We’re actually transitioning people. What we’ve been doing is informing folks that their plan doesn’t meet the test of the essential health benefits; therefore, they have a choice of many options that we make available through the exchange. And, in fact, with subsidy, many people will be getting better plans at a lesser cost. This really is a transition. In fact, the 300,000 figure is the entire year. So it’s really 40,000 people for January 1, and we’re walking them through that transition.”

Gregory pressed Geragthy on a number issues, including whether people would experience “sticker shock” as a result of the ACA’s effect on prices, and whether Florida Blue and other insurance companies had warned the administration about problems with the website before it went live, warnings that went unheeded. Geraghty defended the White House, saying subsequent meetings with the insurance industry had been productive.

“We’re not looking backwards,” Geraghty replied. “I think it really is about how do we move forward and solve this? We serve millions of people across the state of Florida. It would be a distraction for me to spend my time looking backwards. I spend my time figuring out, how do we serve the people in Florida that were trying to bring most education about their options so they can help their families?”

“I’ll respectfully point out I didn’t get the answer to the question I was looking for,” Gregory said.