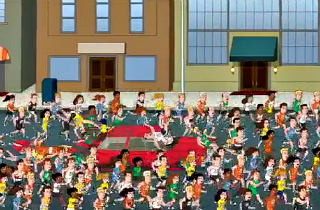 After most tragic events, it seems a lot of people need a Nostradamus-like figure to have “predicted” the events and present some sort of clarity to the vast conspiracy that is human existence. For Monday’s horrific Boston marathon bombings, that widely-circulated “predictor” was a recent Family Guy episode titled “Turban Cowboy.”

In a video has made the rounds through the YouTubes starting last night, some hoaxster or desperate conspiracy theorist spliced together two separate clips from the March 17th Fox cartoon episode to make it seem as though main character Peter Griffin won the Boston marathon by exploding incendiary devices using a mobile phone… while dressed in Muslim garb.

Watch the skillfully edited clip below:

Naturally, the usual suspects picked up on the story and ran with it: Alex Jones‘ conspiracy-mongering website InfoWars has been having a field day using this as an example of the “scripted” nature of the attacks; and right-wing blog GatewayPundit earnestly “flashed back” to the time when Family Guy “used phone bombs to win Boston marathon.”

The former likely saw it as part of the vast corporate media conspiracy that was complicit in the totally scripted “false flag” operation known as the “Boston marathon bombing” — which Jones and his cohorts likely believe was actually an organized plot by Monsanto, the cable networks, the feds, and the leaders of the New World Order. The latter likely just saw it as an “eerie” prediction that falls in line with his belief in the (totally-not-yet-confirmed) Islamic terrorist nature of the attacks.

But, as it turns out, the two clips are from completely opposite ends of the same episode.

The Boston marathon clip? Just a coincidentally horrifying flashback in which Griffin tells Bob Costas that he won the race by driving his car over the other runners. Watch below [REMOVED AT THE REQUEST OF 20TH CENTURY FOX]:

And the phone bomb clip? That came from the latter half of the episode, during a very Family Guy-esque convoluted plot in which Griffin unwittingly falls in with an Al Qaeda sleeper cell. When Peter’s best friends reveal to him that he is associating with terrorists, he uses a cell phone to confront his Islamic “friends” but, upon dialing, two loud explosions are heard outside the bar at which he is drinking. Watch below [REMOVED AT THE REQUEST OF 20TH CENTURY FOX]:

Despite Family Guy fans instantly recognizing the circulating video as a hoax, the Internet has seemingly had a difficult time coming to grips with reality. The revelation became so popular that even Family Guy creator Seth MacFarlane was forced to address the situation himself:

That wasn’t enough to quell the circular logic of conspiracy-mongers like Jones and his InfoWars groupies. After YouTube pulled the original hoax clip, citing its policy against “scams” or “commercially deceptive content,” the site’s ace detective Paul Joseph Watson went into an elaborate theory about how the “episode doesn’t exist to the media” and how this was an act of “censorship” to silence the truth, man.

Watson even admits that the two scenes were from separate parts of the same episode but — never you mind — this is still a predictor because the episode “depicted people being killed at the Boston Marathon, in addition to a separate clip which depicted two explosions.” Quick! Someone find a pre-9/11 movie that contained both a plane crashing into a building… and someone saying the words “nine” and “eleven” at any point during the film! Or

In other words, these people live in a world where unfortunate coincidences are really just manipulations designed by powerful corporations, media entities, and their allies in the shadowy one-world government organization.

And with that, I must be off. It’s time to gas up the jet and find some new chemicals to release in the latest Mediaite chemtrail flyover, while on our way to Monsanto headquarters, where we will meet with the Bilderberg Group to discuss our next plot to cover up for the New World Order and the impending United Nations gun confiscation program.