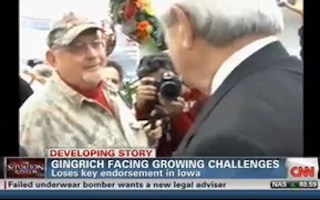 With the Iowa caucus just scant two weeks away, tensions are running high. During a campaign appearance at a grocery store yesterday, on-again, off-again GOP frontrunner Newt Gingrich was approached by a seemingly innocuous supporter, who instead turned out to be something of pretty vocal critic. The grinning man got Gingrich’s attention with “You know something?” before following with “you’re a f*cking a**hole.”

It’s safe to say that Gingrich brings out the passionate side of Iowa voters. During a visit to the Hawkeye State back in May, the former House Speaker was similarly approached by an angry Iowa voter, who told Gingrich that he was “an embarrassment to our party.”

In both instances Mr. Gingrich handled the confrontation with aplomb, in the most recent instance responding to his vocal critic with a familiar playground retort of “it’s a free country.” It’s unclear if Gingrich was referring to the man’s right to free speech, or his own right to be a f**king a**hole.

Fortunately for the U.S. viewing public, a camera situated just behind Gingrich’s sizable cranium captured the entire exchange, which CNN promptly broadcast on The Situation Room yesterday in a report filed by Jim Acosta that focused on Gingrich’s recent challenges in Iowa. In the event that any viewers missed the opening clip, Wolf Blitzer went back to Acosta, asking him to repeat what the angry vet had said. Watching Acosta stumble with an appropriate explanation is almost as entertaining as the source material.