Iranian President: Are Americans ‘Afraid’ of Fighting ISIS on the Ground? 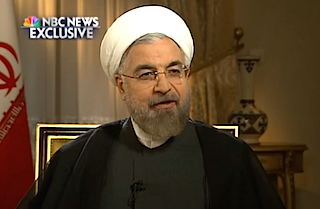 Almost exactly one year after she first interviewed Iranian President Hassan Rouhani, NBC News’ Ann Curry once again traveled to Tehran, where she asked the president about the U.S.-led coalition against ISIS as well as his reaction to the beheadings of American journalists and a British aid worker by that terrorist network.

While Rouhani denounced ISIS for taking the lives of innocent Western bystanders, he also called the coalition put together by the United States to fight them “ridiculous.”

“Are Americans afraid of getting casualties on the ground in Iraq?” Rouhani asked. “Are they afraid of their soldiers being killed in the fight they claim is against terrorism?”

At the same time, Rouhani said ISIS’ killing of innocents goes against Muslim precepts. “They want to kill humanity,” he said. “And from the viewpoint of the Islamic tenets and culture, killing an innocent people equals the killing of the whole humanity. And therefore, the killing and beheading of innocent people in fact is a matter of shame for them and it’s the matter of concern and sorrow for all the human and all the mankind.”

More of the interview is scheduled to appear on NBC Nightly News tonight and the Today show tomorrow morning.

Watch a clip from the interview below, via NBC News: