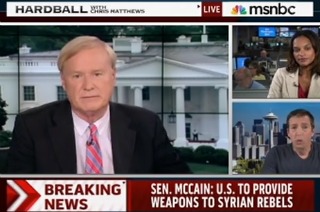 On Thursday, Chris Matthews wondered aloud how proponents of new gun laws can break through the “obsession” Second Amendment rights advocates have with their firearms. He said that gun rights advocates “think about nothing else” and “never change the freaking subject.” Matthews asked how to penetrate that myopic focus; all the while, the chyron below him announced the breaking news that the use of chemical weapons in Syria had been confirmed.

“The gun people, they think about nothing else,” Matthews said of Second Amendment rights advocates. Not supporters of gun control.

“How do you keep an interest among normal people that keeps up with that, well, obsession that the gun people have,” he concluded, once more, definitely not referring gun control proponents.

For good measure, at the end of this clip, Matthews says that the National Rifle Association is airing ads attacking President Barack Obama of having an “ethnic” element to them.

Meanwhile, the chyron below him rang out with the breaking news that the White House had confirmed “U.S officials believe [Syrian President Bashar] Assad used chemical weapons” and that Sen. John McCain (R-AZ) is demanding that the U.S. provide “weapons to Syrian rebels.”