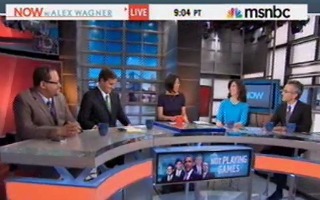 Since the program’s inception, MSNBC’s Now, with host Alex Wagner, has been a consistent outlier in the cable news network’s dayside lineup. In a sea of varying efforts at straight news programming, Now consistently offers overt partisan opinion and analysis for its audience. Even the program’s host gets into the game on a fairly regular basis – in stark contrast to her straight news anchor colleagues and even in violation of MSNBC’s stated programming philosophy. So, the question becomes: is Now its own animal – peerless and without imitators on the network’s lineup – or is Wagner’s show the wave of the future, indicating that the concept of dayside straight news programming is poised to go the way of the dinosaur?

“We’ve learned one thing from the last four years – and the Republicans will stand on your neck and stab you in the eye,” Wagner opined on Thursday’s Now. “The president is being as tough as I think he ever has been in terms of holding the line on this stuff.”

Wagner wondered if President Barack Obama may be antagonizing the Republicans in Congress, particularly with his insistence that future debt ceiling’s increases be made from the Resolute Desk from now on. Far from disagreeing with her assessment, or qualifying it in some way, the vice president and executive editor of MSNBC.com, Richard Wolffe, calmly agreed and said he believe that antagonizing the GOP is Obama’s intention.

“The hostages have become the hostage takers,” Wolffe said. “They are actually ready to take hostages.”

Wolffe described Treasury Sec. Timothy Geithner’s appearances on a variety of news programs in which he relates that the White House is prepared to go over the fiscal cliff if the Republicans in Congress do not come to the table with a tax rate increase as being “a very strong negotiating position.” Wolffe said that the tactic will work for the White House and Congressional Democrats because they won an election based on the central premise that tax rates on the wealthy must increase.

Virtually the same statements could have been made in August of 2011 during the political battle over the debt ceiling limit increase. Then, however, Wolffe’s advice for Democrats was to cut off negotiations with the irresponsible Republicans in Congress.

“This is the strategic problem of negotiating with hostage takers because the ransom just kept coming in. I‘ll get more kidnap victims,” Wolffe said at the time to MSNBC host Chris Matthews. He went on to compare Republicans to Somali Pirates and advised President Obama to take as hard a line with his political opponents as he had with the scourge of Africa’s east coast.

The same political observations that Wolffe made on Thursday’s Now could have been said of Republicans in 2011 – emboldened by their first electoral wave victory in 16 years, the GOP drew “a line in the sand” with their Democratic opponents in relation to spending cuts.

In 2011, as many liberal and progressive commentators believed, the debate over a debt ceiling increase itself was reckless and had the potential to scuttle the global economy. In 2012, however, the president’s regular flirtation with going over the fiscal cliff if Congress does not virtually surrender the power of the purse to the executive branch is applauded.

The kind of partisanship displayed on Now – there is no other term for it but cheerleading – has become a staple of the politically biased cable news environment. Most of that type of naked partiality is reserved for Fox and MSNBC’s morning and primetime lineups. MSNBC has claimed to have a longstanding network policy that their dayside lineup is composed entirely of straight, nonpartisan news.

Indeed, the case could be made that Chuck Todd, Chris Jansing, Thomas Roberts, Andrea Mitchell and Tamron Hall make an effort to maintain their program’s straight news value, some succeeding more than others. When they invite guests onto their programs, those guests are most often newsmakers or nonpartisan analysts. If the network’s partisan contributors make an appearance on those anchors’ programs, they are usually balanced with at least one contributor representing the minority point of view.

This is often not the case for Now. Wagner’s program’s innovative and entertaining format which eschews balance in favor of crisp dialogue may be the way of the future for cable news, but it flies in the face of her network’s supposed programming philosophy.

MSNBC has never officially made it clear that the dayside is no longer sacred space devoted entirely to straight news and judgment value-free analysis. Wagner’s program is a partisan forum and she hosts it in a partisan way (albeit, restrained compared to her appearances on programs like Hardball and HBO’s Real Time).

Mediaite reached out to MSNBC for clarification regarding how Now fits into the network’s straight news programming or if the network has amended their approach to their dayside shows. They have not yet responded to our inquiry.