Is America On The Verge Of A Soviet-Style Collapse? Ron Paul Says Yes, And That’s A Good Thing 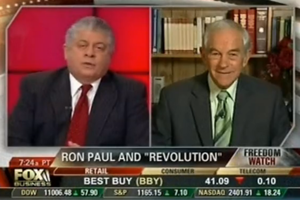 Libertarian icon and perennial FBN’s Freedom Watch guest Rep. Ron Paul visited the program once again to talk pleasantries with host Judge Andrew Napolitano— namely, the imminent threat of revolution and Soviet-style collapse. Why is Rep. Paul so happy about these things? They will force us to adhere to the Constitution!

Judge Napolitano questioned Rep. Paul’s calls of revolution– “are good things about to happen or are horrible things about to happen?”– to which Paul explained that he was not referring to bloody coups or socialist uprising but, rather, an increased interest in “austere economics” and “limited government.” Call it more of an awakening than a revolution, though it will require significant financial turmoil. As to his “Soviet-style collapse” comments, Paul also sees this possibility as a good thing.

“What I’m referring to,” he explained, “is the giving up of our empire.” Just as the USSR had to give up their satellite countries, Americans will have to give up military bases in places like Japan and Germany. “That, to me, will be good. We’ll take care of ourselves, of our borders,” he noted. Judge Napolitano had interpreted the collapse somewhat differently– with states becoming independent nations. The Texas Congressman said he did not foresee pure independence from the federal government, “but [they will be] more independent than they are now. They will have to give up their dependence on the federal government and they will because the federal government will be proven totally inept.” This, in turn, will lead to a more narrow interpretation of the Constitution, which limits government in ways that Paul and Napolitano view as being underminded by stretching out the scope of federal power.

The discussion from this morning’s Freedom Watch via Fox Business Network below: