‘Is David Gregory A Journalist?’: Frank Rich Takes Down NBC Anchor For ‘Preposterous’ Charge Against Greenwald 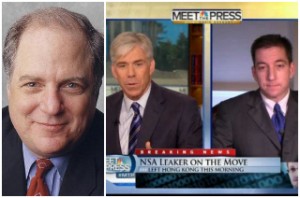 Benson asked Rich if he thought Gregory was “over the line” when he suggested Greenwald may have “aided and abetted” NSA leaker Edward Snowden and asked why he shouldn’t be “charged with a crime” for his actions. “And, speaking to his larger point,” Benson asked Rich, “do you see Greenwald as a journalist or an activist in this episode? And does it matter?”

“Is David Gregory a journalist?” Rich responded, struggling to think of “one piece of news he has broken, one beat he’s covered with distinction, and any memorable interviews he’s conducted that were not with John McCain, Lindsey Graham, Dick Durbin, or Chuck Schumer.” Rich noted that “Meet the Press has fallen behind CBS’s Face the Nation, much as Today has fallen to ABC’s Good Morning America, and my guess is that Gregory didn’t mean to sound like Joe McCarthy (with a splash of the oiliness of Roy Cohn) but was only playing the part to make some noise. In any case, his charge is preposterous.”

Rich defended Greenwald’s role as an “activist journalist,” saying that he himself could be put in that same category given his style of opinion writing. He continued:

“If Gregory had integrity and guts, he would have added that the journalist Barton Gellman of the Washington Post, who published the other set of Snowden leaks (and arguably more important ones), aided and abetted a crime. But it’s easier for Gregory to go after Greenwald, a self-professed outsider who is not likely to attend the White House Correspondents’ Dinner and works for a news organization based in London. Presumably if Gregory had been around 40 years ago, he also would have accused the Times of aiding and abetting the enemy when it published Daniel Ellsberg’s massive leak of the Pentagon Papers.”

Delivering his final blow to Gregory, Rich said, “The new, incoming leadership of NBC News has a golden opportunity to revamp Sunday morning chat by making a change at Meet the Press. I propose that Gregory be full-time on Today, where he can speak truth to power by grilling Paula Deen.” As an added insult, Rich linked to a video of Gregory on Today, dancing “Gangnam Style” with Korean pop star Psy.

In case you missed Greenwald’s appearance on Meet The Press, you can watch it below, via NBC: