Is Doug Hoffman’s Loss A Chink In Glenn Beck’s Armor?

Is Doug Hoffman’s Loss A Chink In Glenn Beck’s Armor? 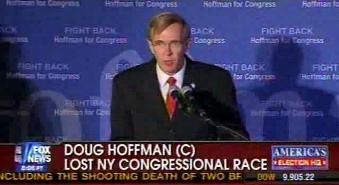 What does it mean? Well since Hoffman is the first national candidate to come out of the 9/12 Project/Tea Party movement, it’s not insignificant.

Yesterday we asked, “Can Glenn Beck and Sean Hannity get Doug Hoffman elected?” Now we’ve got an answer: no. Not specifically at least, but can they get “a Doug Hoffman”-type candidate elected? The jury is still out – after all, the race was very close.

Hoffman’s victory or defeat is a referendum on the current power of Beck, more so even than Hannity or Sarah Palin, who was one of the most high profile candidates to endorse Hoffman over Dede Scozzafava, the GOP choice who dropped out. Beck has made the mission of his show to drive the tea party express, to spout 9/12isms at every occasion. Although Hannity conducted more interviews with Hoffman, Hoffman identified Beck as a mentor.

As Michelle Malkin notes, Hoffman’s candidacy was just the beginning of this movement. “Hoffman’s candidacy illuminated the stark difference between GOP political opportunists willing to pimp out their endorsements to any old ACORN-embracing, Working Families Party-consorting, Big Labor crony who puts an “R” by her name,” she writes today.

Needless to say, the White House disagreed with this assessment. Robert Gibbs said the loss “proves that anger can get you 45% of the vote.”

The fact remains, the tea party activists couldn’t have picked a less charismatic candidate to kick off their national push toward Judgment Day. It wasn’t about Hoffman – it was about defeating Scozzafava, which the movement was successful in accomplishing. But now they’ve lost a congressional seat, and the result amplifies those voices, specifically Newt Gingrich‘s, who said this wouldn’t work.

If Van Jones and ACORN were feathers in Glenn Beck’s cap, this loss plucks one of those feathers out. There will probably be more feathers going in down the road – his power, and ratings, seem to continually be on the incline. But for now, maybe reports (and Time covers) of his megalomaniac stardom are slightly premature.